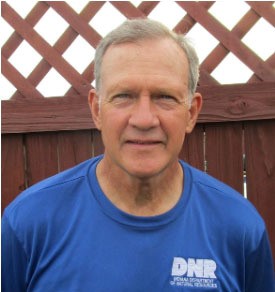 Steve Backs, wildlife research biologist with the Division of Fish & Wildlife, was recently announced as recipient of the 2020 Chase S. Osborn Award in Wildlife Conservation.

The award, which Purdue University Forestry and Natural Resources (FNR) has presented 34 times in its 67-year existence, goes “to an individual who, by writing, research, teaching or other personal accomplishments has made significant contributions to wildlife conservation in the state of Indiana.”

Backs graduated a member of Purdue’s wildlife science class of ’76 and began full-time work for the DNR in 1979 after completing his graduate work at the University of Vermont. He was nominated for the award by two retired interpretive naturalists from the Division of State Parks, Jim Eagleman and Dick Davis.

“I was humbled to think some of my peers, in their retirement, thought enough to nominate me for the award, let alone the deep humble sense I feel in receiving such an award,” Backs said. “Much of the credit goes to the many great mentors I had at FNR during my time there, some from my graduate school days, and to the many co-workers and professional peers around the country who all unknowingly provided me valuable opportunities to glean knowledge from their careers and experiences, and to a family willing to accept the ‘costs’ of my vocation.”

Backs started with DNR in 1974 as a seasonal biologist aide during his undergraduate years, working primarily with white-tailed deer. Backs returned to the DNR in 1979 as the quail project leader and in 1981, he assumed his present wildlife research position as the ruffed grouse and turkey project lead. As periodic vacancies occurred, Backs filled in as the acting farmland and furbearer project leader where he monitored populations of Northern bobwhite, American woodcock, raccoons and coyotes, and developed various reports for DNR supported by his research. Backs has also been Indiana’s lead on the wild pig elimination project.

In addition to his work with DNR, Backs has acted as a manuscript and publications reviewer for a variety of national organizations and has been an author or co-author of more than 40 technical publications.

He also has been a part of the steering committee for Purdue Extension’s Woodland Wildlife Stewardship Workshops, and for National Wild Turkey Symposiums. Backs is active in the Midwest Deer and Wild Turkey Study Group, the Ruffed Grouse Southern Range Research and Study Group, the Midwest Feral Swine Committee, the National Wild Pig Task Force, the Indiana Academy of Science, and The Wildlife Society, among others.

In a normal year, Backs would receive his award at a banquet in the year of the award’s date. However, this year’s banquet was postponed, so he is scheduled to receive the 2020 award during FNR’s 2021 banquet.

Backs joins a distinguished list of Osborn winners who worked for the DNR before, during or after receiving the award, starting with the recipient of the first, Kenneth Kunkel, the 1953 winner and former director of what, during his tenure, was the Division of Fish & Game. The most recent winner was Emily Kress (1992), former director of the Division of Outdoor Recreation.

For more on the Osborn award, see ag.purdue.edu and search for “Osborn Award.”