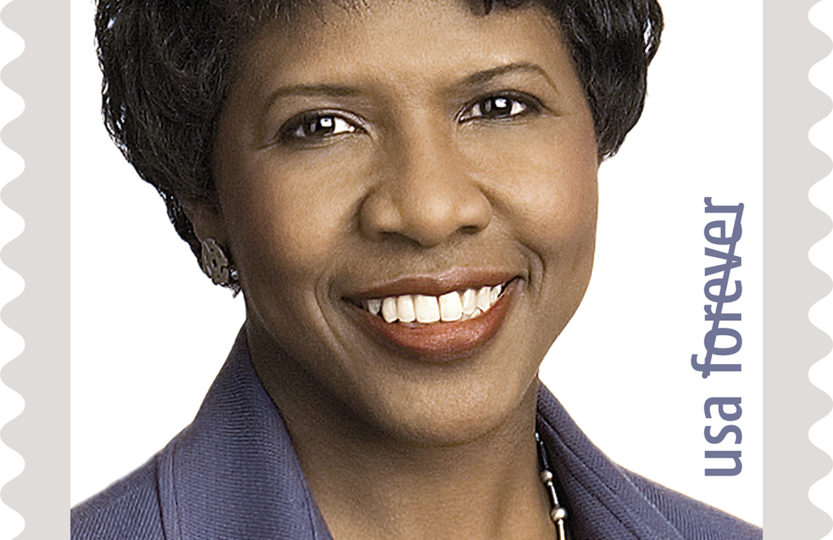 As the nation prepares to observe Black History Month, the U.S. Postal Service today issued the 43rd Black Heritage stamp, honoring one of America’s most respected journalists, Gwen Ifill. The dedication ceremony was held at Metropolitan African Methodist Episcopal Church in Washington, DC, where she was a lifelong member.

“Gwen Ifill was a remarkable trailblazer who broke through gender and racial barriers,” said Deputy Postmaster General Ronald A. Stroman, who served as the dedicating official. “The Postal Service is proud to celebrate Gwen’s contribution as a remarkable journalist with this beautiful commemorative Forever stamp. Gwen was truly a national treasure, and so richly deserving of today’s honor.”

“The Ifill family is thrilled that our sister, cousin and aunt has received this signal tribute to her legacy as a truth-teller, pioneer and exemplar,” said Bert Ifill, Gwen’s brother and spokesperson for the family. “As a reporter and moderator, Gwen was dedicated to two principles: getting the story right and getting the right stories out. As a mentor, supportive friend and family member, she was determined, not only to open doors for those of us previously locked out of opportunity, but also to provide floor plans to help us find our way through. She is forever in our hearts, and we are forever in her debt.”

Among the first African Americans to hold prominent positions in both broadcast and print journalism, Ifill was a trailblazer in the profession.

After graduating from college in 1977, Ifill’s first job as a journalist was at The Boston Herald American. She later worked at The Baltimore Evening Sun, The Washington Post and The New York Times, where she was a White House correspondent and covered Bill Clinton’s presidential campaign in 1992.

In 1994, Ifill moved to NBC, where she covered politics in the Washington bureau. Five years later, she joined PBS as senior political correspondent for “The NewsHour with Jim Lehrer” and moderator and managing editor of “Washington Week,” becoming the first woman and first African American to moderate a major television news-analysis show. During her career, Ifill covered seven presidential campaigns and, in 2004, she became the first African American female journalist to moderate a vice-presidential debate. She also moderated the 2008 vice-presidential debate. In 2013, Ifill became part of the first all-female team to anchor a daily national broadcast news show, “PBS NewsHour.” Ifill died in 2016.

Among Ifill’s honors were the Radio Television Digital News Foundation’s Leonard Zeidenberg First Amendment Award (2006), Harvard’s Shorenstein Center’s Goldsmith Career Award for Excellence in Journalism (2009) and induction into the National Association of Black Journalists Hall of Fame (2012). In 2015, she was awarded the Fourth Estate Award by the National Press Club. She received numerous honorary degrees and served on the boards of the News Literacy Project and the Committee to Protect Journalists, which renamed its Press Freedom Award in her honor.

The 2016 John Chancellor Award was posthumously awarded to Ifill by the Columbia Journalism School. In 2017, the Washington Press Club Foundation and “PBS NewsHour” created a journalism fellowship named for Ifill. Her alma mater, Simmons University, opened the Gwen Ifill College of Media, Arts, and Humanities in the fall of 2018.

The Gwen Ifill Black Heritage stamp is being issued as a Forever stamp, which will always be equal in value to the current First-Class Mail 1-ounce price.

Customers may purchase stamps and other philatelic products through The Postal Store at usps.com/shopstamps, by calling 800-STAMP24 (800-782-6724), by mail through USA Philatelic, or at Post Office locations nationwide. Videos of most stamp ceremonies will be available on facebook.com/usps.

Information on ordering first-day-of-issue postmarks and covers is at usps.com/shopstamps under “Collectors.”