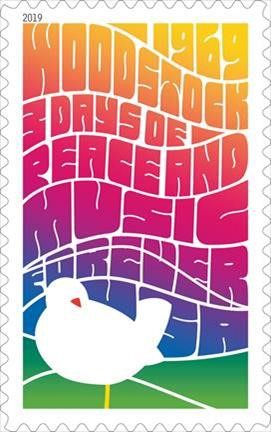 The U.S Postal Service celebrates the 50th anniversary of the Woodstock Festival with a colorful Woodstock Forever stamp designed to represent the peace and music of the festival. The stamp was recently dedicated at a First Day of Issue event held at the Metropolitan Museum of Art in New York City.

“Woodstock was the most famous rock festival in history,” said Kevin McAdams, vice president, Delivery and Retail Operations, U.S. Postal Service. “The Postal Service commemorates the 50th anniversary of Woodstock by issuing a festive Forever stamp as we continue to remember significant events of the ’60s.”

“It’s an honor and an inspiration to be commemorated by the Postal Service. The USPS Woodstock Forever Stamp is an official acknowledgment of something we have felt for 50 years: Woodstock is ‘Forever,’” said Rosenman.

Lang also shared his thanks to the Postal Service “for helping to deliver Peace, Love and Music.”

In August 1969, approximately 500,000 people gathered for the Woodstock Festival in the small farming community of Bethel, NY. Woodstock was the most famous rock festival in history and a dramatic expression of the youth counterculture of the 1960s. Promoted as “Three Days of Peace and Music,” the Woodstock festival came to symbolize a generation.

Music business promoters and entrepreneurs — Lang, Rosenman, Artie Kornfeld, and John Roberts — met and discussed the idea for a unique music festival in January 1969. To bring it about, they formed a company, Woodstock Ventures. The four producers promoted the festival as a weekend gathering of the younger generation away from the hassles of everyday life. Previous large concerts had typically attracted, on the high side, an audience of tens of thousands. But for their one-of-a-kind Woodstock festival, the promoters hoped to draw 50,000 people and, as a precaution, drew up plans to accommodate up to 100,000. For the audience, it was going to be three days away from civilization, which meant the promoters would have to provide campsites, food, toilets, medical care, security and other necessities for living together for the entire weekend.

The festival featured more than 30 performers, an unprecedented assembly of musical talent. Some, such as Joan Baez; The Band; The Grateful Dead; The Who; and Blood, Sweat & Tears, were already well known. Others, including folk singer and acoustic guitarist Richie Havens, guitarist Carlos Santana, and British singer Joe Cocker essentially made their national debuts. Jimi Hendrix performed an electrifying rendition of “The Star-Spangled Banner” that became legendary.

An Academy Award-winning documentary film by Michael Wadleigh and a popular song about the festival written by Joni Mitchell extended the communal spirit of the “Woodstock experience” to an audience of millions.

Much more than just a massive outdoor concert, the Woodstock festival was a defining event that promoted peace and love through music.

News of the stamp is being shared on social media using the hashtags #WoodstockStamps and #PeaceForeverStamps. Followers of the Postal Service’s Facebook page can view the ceremony live at facebook.com/USPS.

The Woodstock (50th Anniversary) stamp is being issued as a Forever stamp, meaning it will always be equal in value to the current First-Class Mail 1-ounce price.

The stamp art features an image of a dove along with the words “3 Days of Peace and Music,” evoking the original promotional poster for the festival. In the iconic 1969 poster, designed by graphic artist Arnold Skolnick, the dove was perched on the neck of a guitar. In the stamp art, the words are stacked in the background in brilliant colors along with the year 1969, USA, and Forever. The white dove stands in the foreground. Art director Antonio Alcalá designed the stamp.

Customers may purchase stamps and other philatelic products through The Postal Store at usps.com/shop, by calling 800-STAMP24 (800-782-6724), by mail through USA Philatelic, or at Post Office locations nationwide. Forever stamps will always be equal in value to the current First-Class Mail 1 ounce price. A video of the ceremony will be available on facebook.com/USPS.

Information on ordering first-day-of-issue postmarks and covers is at usps.com/shop under “Collectors.”