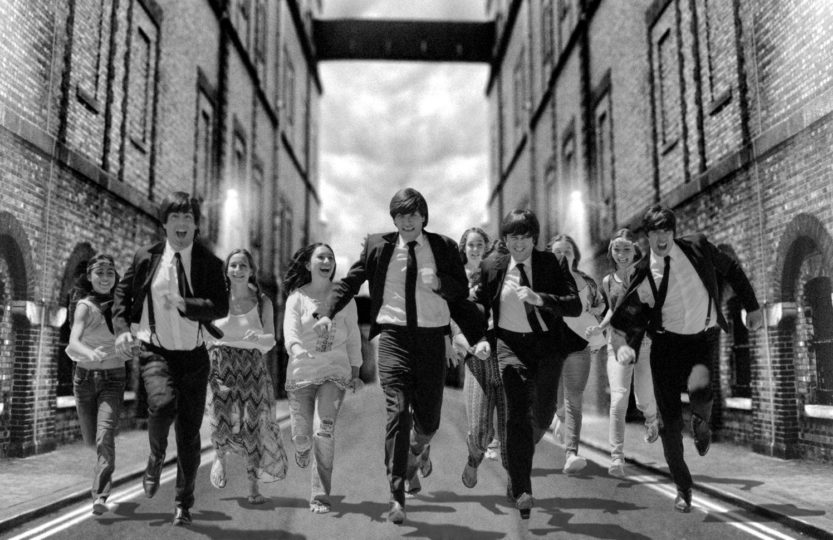 When the touring show Beatles vs. Stones – A Musical Showdown comes to the Arts United Center on June 27, the Fort Wayne Snider High School String Quartet will join the professional musicians on stage to lend some local talent to this homage to the British Invasion.

The show: The two greatest rock ‘n’ roll bands of all time face off in Beatles vs. Stones – A Musical Showdown. Taking the side of the Fab Four is Abbey Road, one of the nation’s top Beatles tribute bands. With brilliant musicianship and authentic costumes and gear, Abbey Road plays beloved songs spanning the Beatles’ career. They engage in a "showdown" of the hits with Stones tribute band Satisfaction – The International Rolling Stones Show, who offer a faithful rendition of the music and style of Mick Jagger, Keith Richards and the bad boys of the British Invasion. The production includes multimedia, period costumes and vintage instruments. It has toured for years, with a critic for the Los Angeles Times at one point declaring: "this is the most unique tribute show in decades." The Fort Wayne show is part of a 125 city tour of the U.S., Canada and Australia.

How the "Beatles" and "Stones" connection was started: The producers of Beatles vs. Stones approached Snider Orchestra Director Helen Hockemeyer looking for a talented ensemble that could hold their own with a rock band in front of an audience. The show commonly hires a local quartet to augment the production while on tour. The quartet’s enthusiasm to perform led them to continue preparing for the show during the recent teacher walkout.

“I love them! ‘In My Life’ is for sure my favorite song,” said Ramie.

Larry has an entire playlist of his favorite Beatles songs, but decided that ‘Hey Jude’ is currently his Fab Four favorite tune.

“I’m very excited we get to play ‘Hey Jude’ in the Beatles vs. Stones show,” he said.

The details: Two of the greatest bands of all time face off in a high-energy, adrenaline-pumping musical showdown. The Fab Four, represented by tribute band Abbey Road, will engage in a barrage of hits against premier Rolling Stones tribute band Satisfaction. Beatles vs. Stones – A Musical Showdown comes to the Arts United Center on June 27 at 7:30 pm. Tickets are $45-$65 and may be purchased by phone at (260) 424-0646, at the Theatre Box Office or online at https://tickets.artstix.org. The show is appropriate for all ages.

And here is some additional information about the Snider High School String Quartet:

Trinity Forish, 15, has been playing the violin since she was ten. Trinity has performed with Fort Wayne’s Philharmonic Youth Concert Orchestra for four years.

“I enjoy performing with orchestra because it’s nice to see the way the others express things in the way they play the music since we all have unique ways of expressing ourselves.”

The freshman has competed in solo and ensemble festivals, earning gold ratings as a soloist and with a quartet.

Gabi Anderson, 16, began playing violin six years ago. After being told she was a ‘natural’ when she was trying out instruments, she stuck with the violin.

In addition to performing with her school’s orchestra, Gabi is also a Snider High Cheerleader and a member of her church choir. She is a National Honor Society Distinguished Scholar.

Gabi enjoys playing the violin and getting to learn new tricks and techniques.

“I love playing with my friends and the new music that I get play.”

The sophomore plans to attend IUPUI to become a music therapist.

Larry McDowell,15, picked up playing the viola four years ago, after his teacher needed another violist in the class. He has since earned gold ratings three times in solo and ensemble festivals with the viola.

“Playing the viola gives me an escape from my normal life and is my connection to music. Playing in the orchestra is a way to connect to people who have an interest in music, just like me.”

The freshman plans to attend college to major in music performance.

Ramie Kuhns, 18, has been playing the cello for six years. She made the switch from violin to cello in middle school and has stuck with the cello since.

Ramie is a member of the Purdue University Fort Wayne Community Orchestra. She has competed at ISSMA competitions where she earned gold ratings for both solo and ensemble performances.

“Playing with the orchestra gives me the opportunity to see the progress that happens and the challenge and breaking down of parts. Soon the rehearsing turns to muscle memory and we are able to have fun doing something that was once so hard.”

The graduating senior plans to attend Indiana Purdue Fort Wayne to study Music Education with the goal of working for the local public school district.