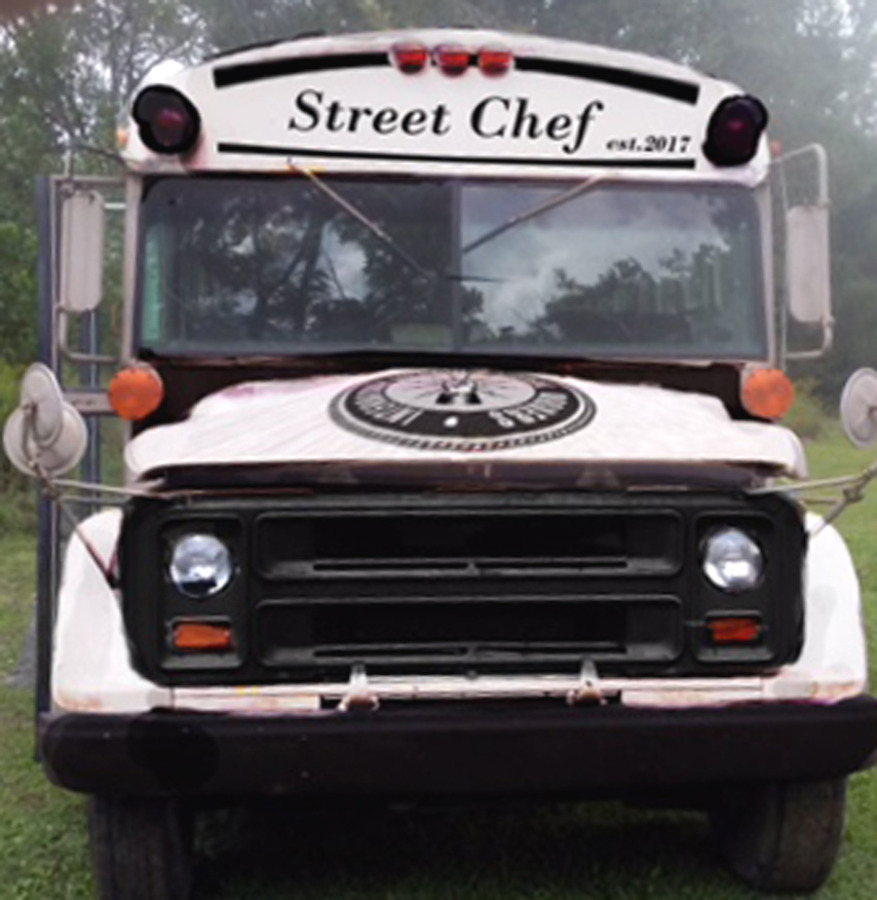 A new restaurant on wheels is coming to Fort Wayne in the form of a food bus. Local Chef Eddie Ribel recently repurposed an old school bus and started Street Chef as a division of his existing company, Calling a Chef, LLC. Street Chef will make its debut June 6-10 as a food vendor at Canal Days in New Haven. Thereafter, its one-of-a-kind food bus will be making the rounds at various Allen County locations Monday through Saturday from 9 a.m. to 9 p.m. offering a selection of savory Italian sandwiches, barbecue pork and chicken, as well as side dishes and beverages.

While the Street Chef bus will be making regular stops at various established locations—such as at Food Truck Thursday, the Barr Street Market and the River Greenway, all in downtown Fort Wayne—it also will be available to cater small and large events with 30 to 500 guests, according to “Chef Eddie,” as Ribel likes to be known. The bus’s first scheduled stop will be in conjunction with the SCAN Duck Race on June 17 at the Fort Wayne Turners club, adjacent to Johnny Appleseed Park.

The full-size school bus has been customized to include a basic kitchen set-up and a walk-up window. Most sales are expected to be carryout orders, but Street Chef also will provide a small area for customer seating outside of the bus. Chef Eddie expects to have two full-time and 18 part-time employees once the food bus is running at capacity.

The food bus is a dream-come-true for Chef Eddie, who graduated from Ivy Tech in 2002 with a degree in culinary arts and loves to cook. His professional experience includes working at five-star resorts and exclusive children’s summer camps, custom catering, and hosting a local cooking show called “It’s Supper Time.” He says he originally looked into opening a brick-and-mortar restaurant, but found the start-up costs to be prohibitive.

Street Chef is bringing a Chicago-style food atmosphere to Fort Wayne, with a menu revolving around four core Italian sandwiches and daily specials. Sandwich choices will include Meatball Marinara, Italian Sausage, Italian Beef with Au Jus, and an Italian Philly. Chef Eddie will be partnering with the local restaurant Triple B BBQ to offer ribs, rib tips, pulled pork and barbecue chicken on his food bus. Side dishes will include BBQ baked beans, cole slaw and potato salad, and beverage offerings will include soft drinks and bottled water, along with lemonade shakeups and fruit smoothies. For those customers preferring breakfast instead of lunch, Street Chef will offer the Steve-O Special, which consists of buttermilk biscuits topped with fresh Italian sausage gravy, along with orange juice as a beverage choice.

Chef Eddie says he intends to buy his supplies from local businesses and wants to be as supportive of the local community as it has been to him. He says he has received small business and moral support from the Northeast Indiana Small Business Development Center, financial support and encouragement from friends Shaun and Jennifer Loveless, electrical work from IBEW Local 305, plumbing from North Side Plumbing and Heating, paint from Haffner Paints, and supplies from Fontanini Italian Meats and Gordon Food Services, among others.