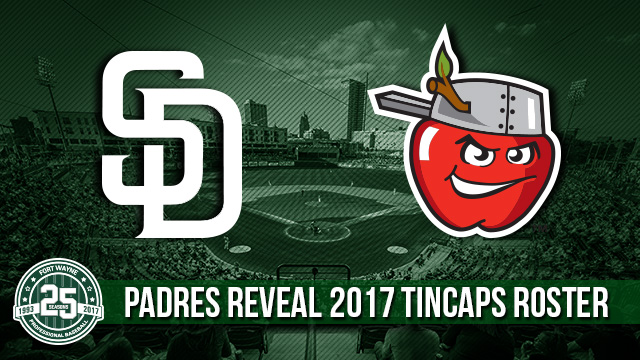 The consensus among experts — from Baseball America to MLB.com and just about all in between — is that the San Diego Padres have one of the most talented farm systems in baseball. Some of that talent has already rolled through Parkview Field in recent years, and much more is still to come. On Sunday, the Padres revealed the 2017 Opening Day roster for the TinCaps.

Fort Wayne’s latest 25-man unit features five of San Diego’s current Top 30 Prospects. The list is headlined by shortstop Fernando Tatis Jr., the son of a former Major Leaguer, who at just 18 years old is rated as one of the Top 50 prospects in all of baseball by ESPN.com.

“This team may be younger than others in the Midwest League, at least as far as position players go,” said Anthony Contreras, who’s returning for his second season as the team’s manager. “But we have as much talent as I’ve ever seen at the A-ball level. We’re looking forward to working hard and having a fun and exciting year for the fans in Fort Wayne.”

While virtually every team in Class A can be described as youthful, that holds especially true for the position players in Fort Wayne. The group includes 17-year-old infielder Eguy Rosario (pronounced: EGG-ee). He’s the youngest of six teenagers on the roster — four of whom are infielders.

That said, the TinCaps’ pitching staff is “veteran” by comparison, with only one teenager, left-hander Logan Allen, who’s the most highly touted pitcher on the team. Allen is also one of 12 players who were with Fort Wayne in 2016. First baseman Brad Zunica, who led the club with 14 home runs, is another.

The TinCaps begin the 2017 season on Thursday on the road against the Bowling Green Hot Rods (Tampa Bay Rays). Opening Day at Parkview Field is set for Saturday, April 8 (6:05 p.m.) as the TinCaps host Bowling Green. Fans who attend Opening Day will receive a free TinCaps Magnet Schedule and be treated to Postgame Fireworks. Tickets to all 2017 TinCaps games are available at TinCapsTickets.com, by calling 260-482-6400, and at the Parkview Field Ticket Office.

Prior to Opening Day, fans are invited to Meet the Team Night at Parkview Field on Wednesday, April 5 (5-8 p.m.). This free event offers fans a chance to watch the team practice, followed by an autograph-signing session.

Link to story on TinCaps.com.

See below for a further breakdown of this year’s Opening Day roster.

Majority of 2016 with a Different Organization: 2

Has Not Played in MiLB: 1

Drafted, Signed Out of High School: 5

Drafted, Signed Out of College: 12