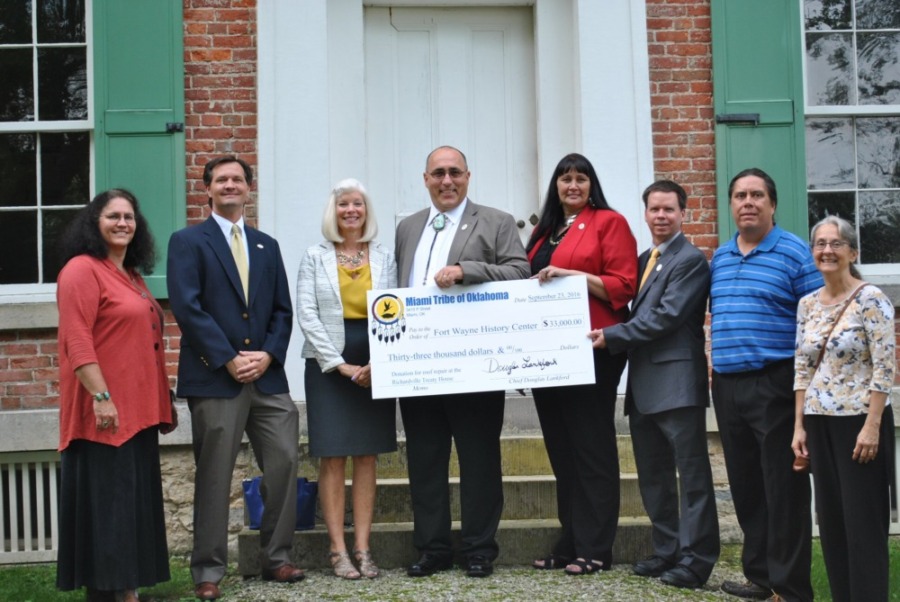 The History Center received a donation in the amount of $33,000 from the Miami Tribe of Oklahoma to provide for the restoration of the Chief Richardville House’s historical wooden shake shingle roof. History Center Board of Directors President Karen Richards and Executive Director Todd Maxwell Pelfrey received the donation for the roof restoration, a project that is expected to be completed this fall.

Miami Tribe of Oklahoma Chief Douglas Lankford stated, “We are so honored to be here today, at this historic place, to make this presentation to the History Center. This donation is made on behalf of all citizens of the Miami Tribe of Oklahoma to show our respect to this house, its story and place in our history, and to aid the History Center in their work to sustain it as a historic landmark for generations to come.”

The Chief Jean Baptiste de Richardville House was constructed in 1827, funded in part by the 1826 Treaty of Paradise Springs, by Chief Richardville, who served as Civil Chief of the Miami from 1814 until his death in 1841. Since 1991, the History Center has stewarded the Chief Richardville House, which bears a number of noteworthy titles and distinctions, and in 2004 completed a decade-long restoration of the structure totaling nearly $400,000. In 2012, the Chief Richardville House became only the second National Historic Landmark in Allen County and the 38th in the state. It is also recognized as the oldest Native American structure in the Midwest, the first Greek Revival style house in Indiana, and the only existing Treaty House in the nation. The home is open for public visitation on the first Saturday of each month from May to November, as well as available throughout the year for private tours and rentals.