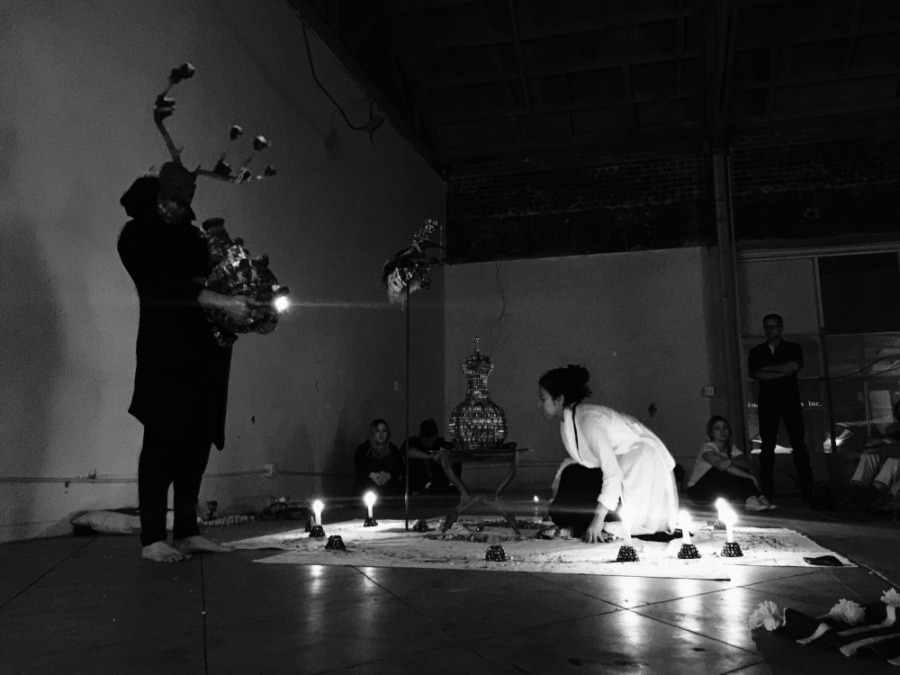 The Fort Wayne Museum of Art presents an evening of live performance with San Francisco-based artist Lucien Shapiro as he performs his Fear Collecting Rituals, accompanied by a film screening with Shaun Roberts.

Artist Shapiro travels the country performing two rituals that focus on the collecting and relinquishing of fear and the journey of finding oneself and discovering inner light. He began his project with a debut at Hashimoto Contemporary in San Francisco and travel towards the East Coast from the West Coast and back again.

Shapiro’s stop in Fort Wayne will take place at FWMoA on July 1 from 6-9pm and will start with a film screening starring Shapior that relates to the mantra ‘see no evil, hear no evil, speak no evil’ and will explore the process of slowly losing the senses with an attempt to regain what has been lost.

After that, a new film will screen entitled, "Fear is the Mind Killer." This is a ritual performed and filmed and will address the greatest challenges each of us face in our lives. The Fear Ritual symbolizes one’s ability to relinquish the doubt and despair that prevent one from conquering and moving forward on our personal journeys. In this ritual, the mask-wearer will place the Relinquishing Vessel in front of him or herself, kneel and repeatedly dip the glimmering stone hanging from his mask into the vessel while chanting “I release you.” The mask-wearer repeats the chant, feeling the escape of fears into the vessel, and pours the vessel’s contents in a circle, and through a long meditative sleep amongst relinquished fears, conquers his challenges in order to progress.

The Light Collector Ritual symbolizes one’s continual search for guidance along the path of life, revealing the notion that the light we seek may simply exist within ourselves. During these rituals, Shapiro will ask participants to write down one or two of their greatest fears to place in the Relinquishing Vessel. Shapiro will then carry those fears along his journey until he reaches his destination in New York City where he will begin his new journey of life. Once he has arrived, he will perform one last fear cleansing ritual of the many fears he has collected over the course of his journey.

Admission to this performance is just $5. Other FWMoA galleries will be closed to maintain the focus on Shapiro’s performance. Cash Bar by CS3 and music accompaniment by John Cheesebrew, Derek Mauger, and Kay Gregg. This performance has been organized by FWMoA Adjunct Curator of Contemporary Art, Josef Zimmerman.

Processed with VSCOcam with b4 preset