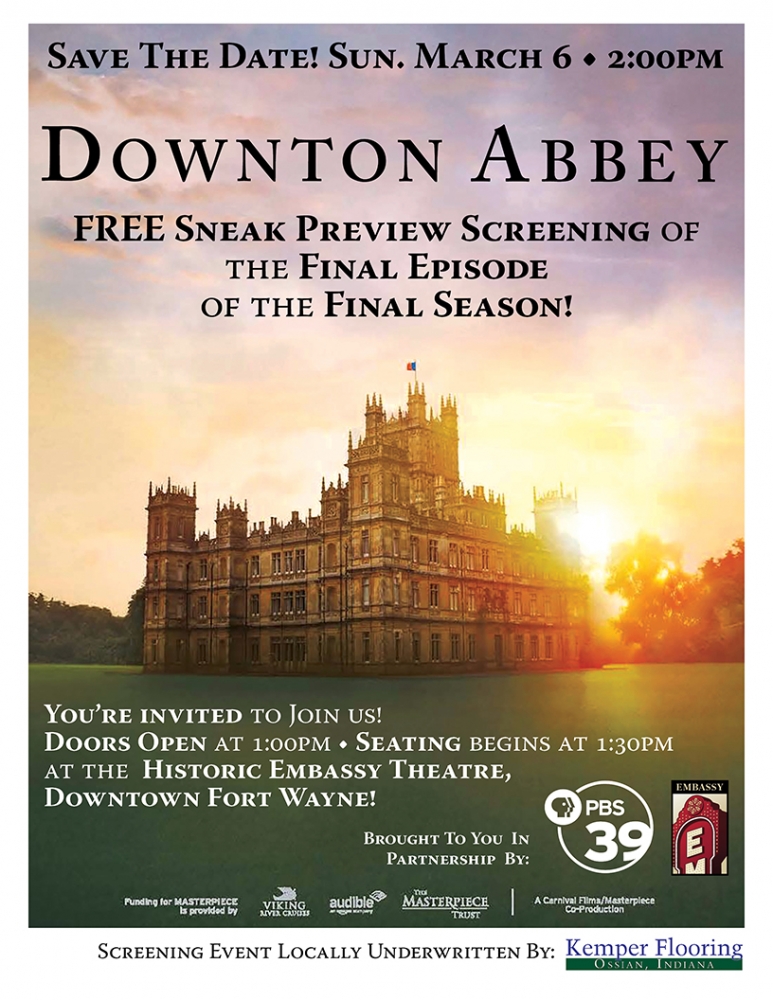 There will be a FREE public sneak preview of the entire final episode of the final season of the Masterpiece PBS hit series, Downton Abbey at the Embassy Theatre at 2:00pm on March 6, a full seven hours before it is scheduled to air on PBS39 channel 39.1 at 9:00pm. The Embassy’s front doors will open at 12 Noon with theater doors opening at 1:00pm and seating is on a first come basis.

In the past PBS39 has offered free sneak previews of portions of the first episode of Downton Abbey since the series’ inception five seasons ago. With the series ending on March 6, PBS39 wanted to offer local fans an early showing of the complete final episode and got clearance from Masterpiece PBS and producing station WGBH in Boston to do so.

As a special thank you to Downton fans, PBS39 and the Embassy Theatre are inviting attendees of this last screening to the Indiana Hotel Lobby for camaraderie, conversation plus tea and cookies directly after the screening, while they last.

Downton Abbey has become an indelible part of the popular culture, parodied by Jimmy Fallon and Stephen Colbert, and on “Sesame Street” and “Saturday Night Live.” It has been the topic of countless discussions on Twitter and Facebook, and has garnered as much publicity as any series on television, with the acclaimed cast gracing the covers of Entertainment Weekly and TV Guide and appearing on “TODAY,” “Good Morning America,” “The View” and other popular TV shows.

Julian Fellowes, writer and creator of “Downton Abbey,” said, “The ‘Downton’ journey has been amazing for everyone aboard. People ask if we knew what was going to happen when we started to make the first series and the answer is that, of course we had no idea. Exactly why the series had such an impact and reached so many people around the world, all nationalities, all ages, all types, I cannot begin to explain. But I do know how grateful we are to have been allowed this unique experience. I suspect the show will always be a principal marker in most of our careers as we set out from here, and if so, I consider that a blessing and a compliment.”