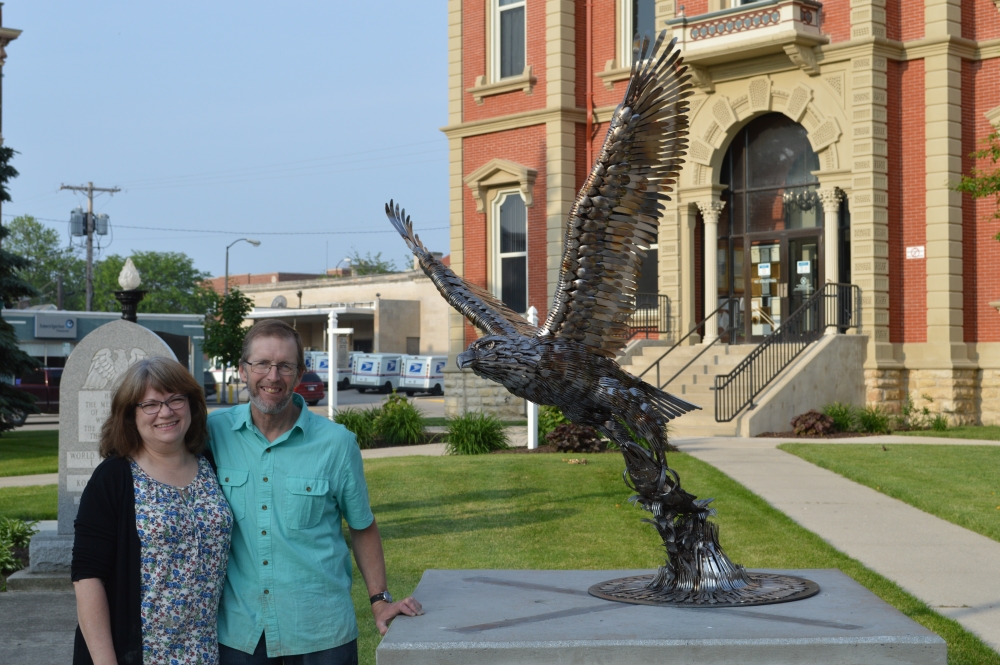 The Decatur Sculpture Tour 2015-2016 Sponsors’ Choice award has been given to Gary Hovey of New Knoxville, Ohio for his exhibit ‘Resilience.’ Collecting votes from the tour sponsors, Hovey conveyed his appreciation of the award. “This is surprise and a certainly a pleasant one,” said Hovey. The award is the second one received for his ‘Resilience’ exhibit.

Earlier this year, City of Decatur, Mayor John Schultz presented the 2015-2016 Decatur Sculpture Tour (DST) ‘Best of Show’ artist-award to Hovey for ‘Resilience.’ The Best of Show award was announced at the Artists’ Forum in June.

The sculpture’s artist statement provides insight into Mr. Hovey’s creative process. “Here we see strength and agility embodied in a species bounced back from the brink of extinction to flourish again in the American wild. This life-size bald eagle has a wing-span of 6’ 4”. Each wing consists of over 150 knives, 100 spoons and 50 forks.”

The Best of Show recognition is particularly notable as this reflects the decisions of the artists who participated and attended the 2015-2016 DST. As reported by Greg Mendez, DST committee member and participating artist, “This recognition comes with little financial reward but, instead, which for an artist, this is even more important, it comes with the notable approval of the fellow artists … and ‘bragging-rights’. This is one of the highest ranking recognitions an artist can receive.” The DST Sponsor Award represents the financial sponsors of the event and is often presented to the most impressive and unique entries.

Mayor Schultz invites the community to take a closer look at this exhibit. He reports, “I’m sure, you, too, will be impressed.” Mayor also invites the communities to the fifth annual, 2016 DST Unveiling Festival: Fri., June 10, 2016 at 6:00 pm in Decatur, Indiana. The talent of Gary Hovey and many other artists will be on display with an array of new sculptures.

North Adams Arts Council (NAAC) president and DST Committee member Sue Roe, reminds the community that each exhibit has an element of education. For docent-led tours, please contact the DST through www.decatursculpturetour.com, the City of Decatur Coordinator Melissa Norby (260) 724-7171, or the Adams Public Library at (260) 724-2605.

For a map and brochure of the 2015-2016 DST, please refer to the DST public information boxes on the corner of the Courthouse Square or the new Founders Park.

Decatur is located 20 minutes south of Fort Wayne and two hours north of Indianapolis at the cross roads of U.S. 27 and U.S. 224, just minutes from the Indiana—Ohio line.

Origin and history of the Decatur Sculpture Tour: During the 2011 Decatur Kekionga Festival, the Adams Public Library hosted a sculpture exhibit by local artist Greg Mendez. Concurrently, the library commissioned Mr. Mendez to create and install the sculpture “It Must Be a Good Book” in front of the library in memory of longtime library volunteer Dianne Linn. The sculpture was recognized as a concrete example of the positive effects an outside sculpture creates in a downtown setting. The Mendez sculpture and encouragement from the community led the artist and local leaders to begin organizing the 2012 Decatur Sculpture Walk to inspire, soothe, provoke, connect and involve the public through art. Eight outdoor and four indoor sculptures were featured in the first year. In 2013, the organization’s name was changed to Decatur Sculpture Tour to reflect the expected expanded footprint beyond the immediate downtown.