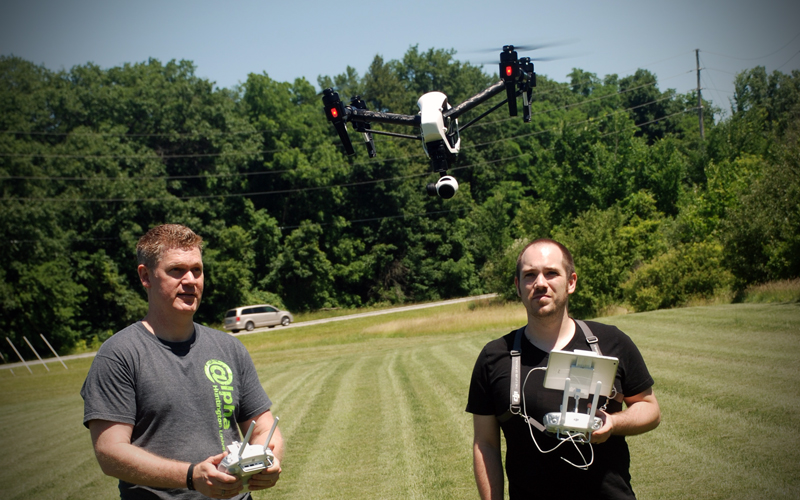 The UAV drone has four rotating propellers that can take up to 4K footage, which refers to resolution. It has a 360-degree pan for capturing video. It can be piloted by one or two people, one flying the machine and one taking video, and it runs off of controllers that are attached to iPad minis. It connects to satellites in GPS areas, but it also has its own sensors to detect where ground level is so it will not crash.

“The addition of our new UAV DJI Inspire is going to help our students be more competitive in a very tight job market in media and film,” said Dr. Lance Clark, professor of digital media arts film and communications. “Someday soon our students will be able to get UAV certification, and the uses of UAV’s are growing every day. We also see great potential for our new agribusiness major. We are so thankful for outside donors who helped us purchase this drone and also some additional ones for the department.”

The UAV drone will be used in DMA classes, as well as in the new agribusiness major. Film students can use the camera for establishing shots when a scene begins. Agriculture students can use it for scanning crops or checking on cattle. The department hopes to eventually obtain a crop-scanning drone that has sensors built in for yield.

Nathan Hartman, digital media arts studio supervisor, is currently in the middle of UAV certification and will soon be able to teach a course in UAV at Huntington University. He hopes to start a UAV certification program for HU students from any major. It would be based on flying hours and include bookwork as well as Hartman’s teachings.

“We’re really happy, and it’s such an open field,” Hartman said. “It feels a little bit like when the DMA program started. I don’t know what the UAVs will be like in 10 years, but we’re excited to see what the future holds.”

Clark has previous experience working with UAVs because he owns a personal UAV.

“I have been flying my UAV the DJI Phantom 2 for about six months,” Clark said. “This new Inspire is a totally new beast and I’m so excited that we are stepping into the high end category of professional drones.”

The inaugural flight of the UAV DJI Inspire took place Tuesday, June 23, in 14 miles per hour winds. (Check out the video footage: http://bit.ly/1LQKcpF or more photos from the flight: http://on.fb.me/1GFwF2T).