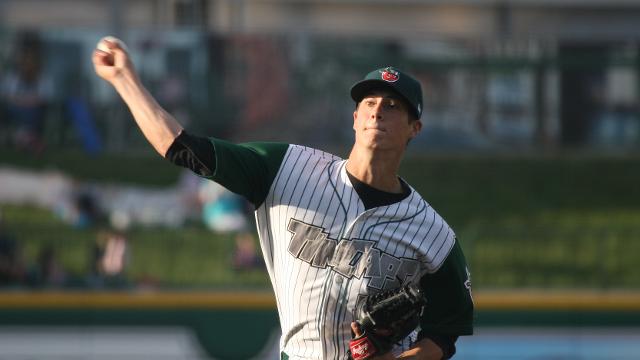 Matt Wisler, who pitched for the TinCaps in 2012, made his Major League Baseball debut on Friday night for the Atlanta Braves against the New York Mets at Turner Field. Wisler earned a win thanks to some help from a former Fort Wayne teammate.
The 22-year-old right-hander from nearby Bryan, Ohio, allowed only one run on six hits and no walks in eight innings as he struck out two batters. Despite his impressive performance on the mound, Atlanta trailed 1-0 after 7 ∏ innings. But in the bottom of the eighth, second baseman Jace

Peterson, who also was a 2012 TinCap, hit a two-run double to put the Braves on top.
Meanwhile, Wisler’s catcher on Friday was A.J. Pierzynski, who played for the Fort Wayne Wizards in 1995 and ’96. New York’s lone run was driven in by left fielder Michael Cuddyer, who was with the Wizards in ’98.
Wisler and Peterson were both traded by the Padres to the Braves during the off-season, although in separate deals. Wisler was included in an April trade that brought closer Craig Kimbrel to San Diego, while Peterson went over in December as part of an exchange for outfielder Justin Upton.

Back in 2012, Wisler helped lead the TinCaps to the Midwest League Championship Series. His 2.53 ERA that season was the third lowest in the league.

The TinCaps honored Wisler with a bobblehead giveaway for fans on Aug. 27, 2014. He returned the favor after the season in September by returning to Parkview Field to meet with fans and sign autographs.

Also on Friday night, Joe Ross, who pitched for the TinCaps in 2012 and ’13, earned a win for the Nationals against the Pittsburgh Pirates. Ross struck out 11 batters in 7 1/3 innings of one-run ball. Since he was called up to Washington two weeks ago, he’s gone 2-1 with a 2.66 ERA.
Since 1994, the Fort Wayne Wizards and TinCaps have produced 136 major leaguers.
Recent TinCaps to Debut in the Major Leagues