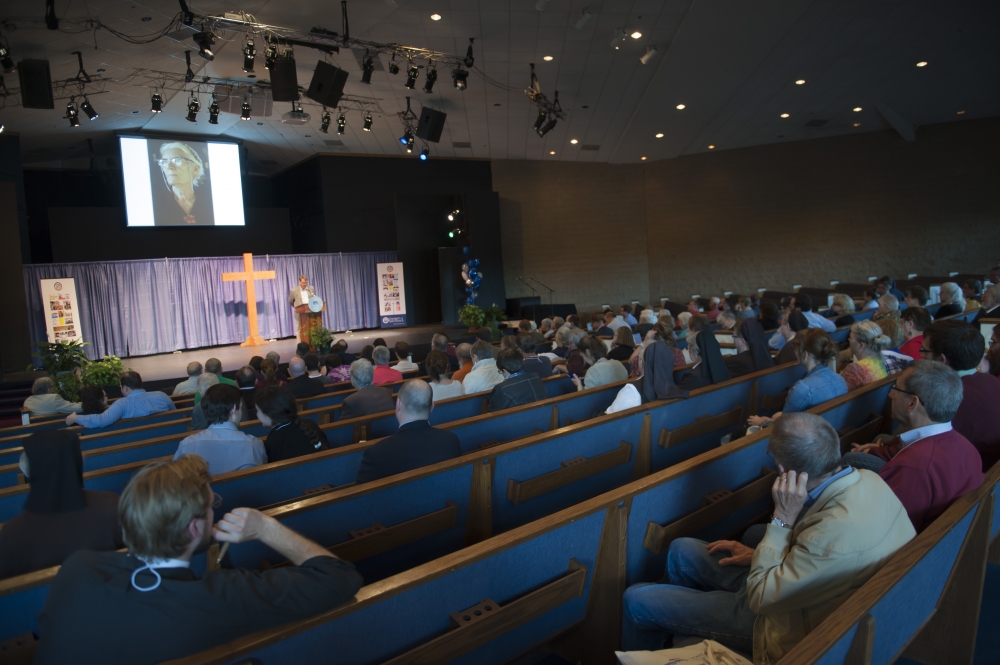 Attendees from as far as Paris came to the University of Saint Francis to celebrate the life of Dorothy Day.
On May 15, the University of Saint Francis wrapped up the 2015 Dorothy Day Conference, which drew an international audience to the campus over three days, including visitors from as far as California, Texas, New York, Louisiana, Canada and even France. The keynote address, a free public lecture by Los Angeles Archbishop José Gomez, drew approximately 400 guests on May 14 to the USF Robert Goldstine Performing Arts Center.

Day (1897-1980) was famously eulogized as “the most significant, interesting and influential person in the history of American Catholicism.” Her life is said to have embodied the recent call of Pope Francis to build “a poor Church for the poor”—and her combination of political radicalism with Catholic orthodoxy is thought to have the potential to lead the Church beyond the categories of “liberal” and “conservative” in its engagement with American culture and politics.

“The life of Dorothy Day provides an example to all people, not just Catholics, of how the teachings of Christ can guide our society through even the darkest of times,” said Dr. Lance Richey, dean of the USF School of Liberal Arts and Sciences, who coordinated the conference along with co-sponsor Our Sunday Visitor. “We feel so blessed to have the opportunity to share her work and to host these conversations that keep the spirit of her work alive for generations to come.”

Archbishop Gomez’s keynote address on the life of Dorothy Day can be viewed online at dorothyday.sf.edu.

Those interested in learning more about Dorothy Day can purchase the newly reissued 75th anniversary edition of Day’s book, “House of Hospitality,” which was edited by Richey and features a foreword from Cardinal Timothy Dolan of New York. It is available on Amazon.com and in many bookstores including the University of Saint Francis Campus Shoppe.