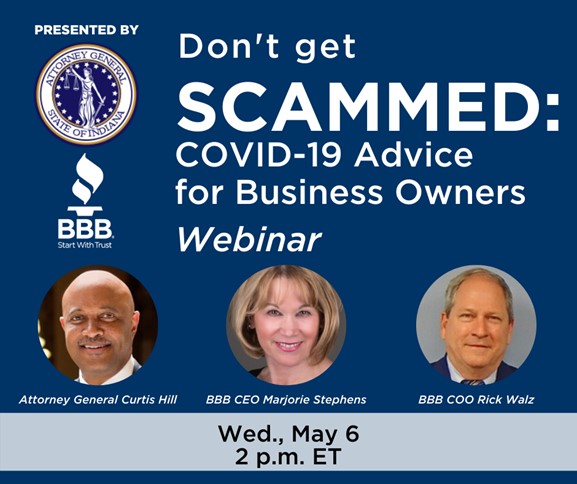 The Better Business Bureau Serving Northern Indiana has partnered with Indiana Attorney General Curtis Hill to educate Indiana business owners about various business-to-business (B2B) scams and ways to avoid them on a joint webinar, scheduled for Wednesday, May 6, at 2 p.m. ET.

While most scams target consumers, B2B scams have become increasingly commonplace, according to the Federal Trade Commission (FTC). Business owners must pay careful attention if they want to avoid becoming victims themselves.

Participants will learn which B2B scams the AG’s office is receiving reports on from Indiana Attorney General Curtis Hill, followed by BBB’s COO Rick Walz sharing how to recognize scams and sharing tips from to help businesses avoid being scammers.

Business owners can register for the webinar online at https://bit.ly/BBB-AG or find registration details on the BBB’s Facebook, Twitter or LinkedIN pages. The webinar is open to all Indiana business owners.

Attorney General Curtis Hill is a native of Elkhart and received both his bachelor’s degree in business and his law degree from Indiana University. He was serving his fourth term as Elkhart County prosecutor when he was elected the state’s 43rd attorney general in 2016. By casting 1.64 million votes for Curtis Hill, Hoosiers made him the top vote-getter of any elected official in Indiana history. As Indiana’s chief legal officer, Attorney General Hill oversees a staff of nearly 400 employees spread across multiple divisions. He and his wife, Teresa, have five children.

Rick Walz is COO of BBB Serving Northern Indiana. Prior to taking over as VP/COO for Better Business Bureau, Rick spent the majority of his career in retail consulting and business development with independent hardware and building material retailers for two leading national hardware and building material cooperatives. In his role at BBB, Rick leads and directs the day to day operations in achieving the strategic goals, objectives and mission of the BBB.