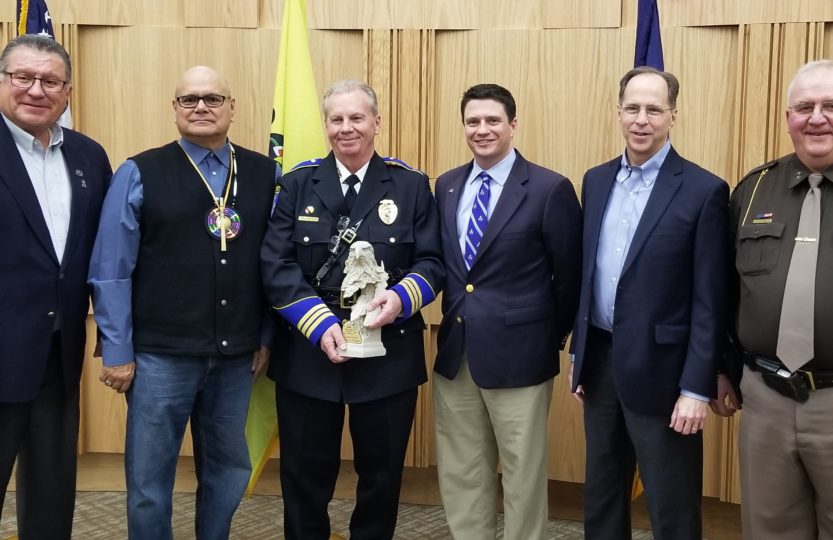 The Pokagon Band of Potawatomi is pleased to announce that Chief William Lux of the Pokagon Tribal Police received the 2020 “Soaring Eagle Award” from the LaSalle Council, Boy Scouts of America (BSA) at a ceremony held at the Pokagon Justice Center in Dowagiac on March 11. The Soaring Eagle Award recognizes a person whose leadership in business, industry, government, education, social work or other endeavors has contributed significantly to the growth and vitality of Berrien County. The Pokagon Tribal Police Department also received the “Good Turn Award” for supporting the development of value-based youth leadership training in area communities. Berrien County was one of Michigan’s founding communities to establish Boy Scouts of America as a youth development and leadership program in 1919. The LaSalle Council, BSA is proud to commemorate the past and inspire future generations to become good citizens, connect with, and serve their communities.

“We are thrilled to honor Chief William Lux with the 2020 Soaring Eagle Award for both his compassion and leadership to the communities of Southwestern Michigan,” said John Cary, Scout Executive/CEO of the LaSalle Council. “Chief Lux’s impact on local youth reflects the same values found in Scouting, which is still very much needed in today more than ever. Scouting has made a significant impact on the lives of thousands of youth in Southwestern Michigan and I believe strongly in the Scouting mission to instill the values of the Scout Oath and Law in young people.”

“Chief Lux has been a valuable leader and instrumental in the long-term success of our Tribal Police Department, which was established in 2003,” said Matthew Wesaw, Tribal Chairman of the Pokagon Band. “Not only has he continue to raise our professional standards, but he has also fostered great working relationships at local, state and federal levels. We are very pleased that he is being recognized for his contributions, along with the rest of the Pokagon Police Department.”

During the summer of 2020, Chief Lux and the Pokagon Tribal Police Department will be providing a “Youth Police Academy” for Pokagon Citizen Youth and will partner with the LaSalle Council, BSA to sponsor a “Police Explorer Post” in Dowagiac, starting in the fall of 2020, which will include all youth from 14 to 20 years of age.

The mission of the Pokagon Band Tribal Police is to provide a safe, welcome, and orderly environment for the Pokagon Band of Potawatomi community, defend the sovereignty of the Pokagon Band and the rights of all the people in its jurisdiction, and assist in improving the quality of life for all Pokagon Citizens. The Police Department consists of highly educated, trained men and women who put their lives on the line every day to protect the membership and the surrounding community. Pokagon Tribal Police Officers are licensed under Michigan Commission on Law Enforcement Standards (MCOLES), deputized by Berrien, Cass and Van Buren Sheriff’s Offices as deputies in Michigan, and by St. Joseph County Sheriff’s Office as officers in Indiana. All are also commissioned as federal officers by the Bureau of Indian Affairs.

For those interested in supporting youth programming and scouting in Southwestern Michigan, please call (574)289-0337 or visit www.lasallecouncilbsa.org.