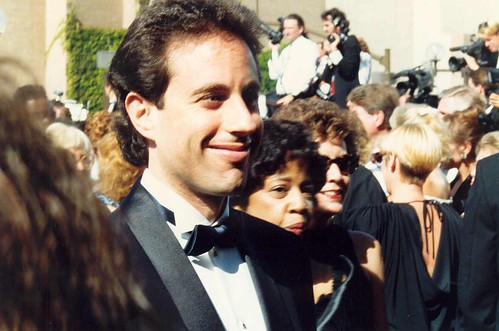 Embassy Theatre and JS Touring announced today that America’s premier comedian, Jerry Seinfeld, will return to the Embassy stage on Friday, May 29 at 7 p.m. Tickets go on sale to the general public on Friday, March 13 at 10 a.m.

America’s premier comedian, Jerry Seinfeld, comes to the Embassy in Fort Wayne, IN, to perform his signature stand- up routine on May 29 at 7 p.m. Seinfeld has been hailed for his uncanny ability to joke about the little things in life that relate to audiences everywhere. Seinfeld made his Netflix debut with the original stand-up special “Jerry Before Seinfeld.” His latest project on Netflix is the Emmy-nominated and critically acclaimed web series “Comedians in Cars Getting Coffee,” which has garnered over 100 million views, and which the New York Times describes as “impressively complex and artful” and Variety calls “a game changer.”

Seinfeld continues to perform both nationally and internationally. Most recently, Seinfeld is performing the last of many shows at the Beacon Theatre in New York City as part of an ongoing residency. Seinfeld began this overwhelmingly successful residency in 2016 and continued it throughout 2017 before resuming again in 2019 and concluding in March of 2020.

Built in 1928, the Embassy Theatre is Indiana’s largest self-sustaining historic theater. Originally known as the Emboyd, with the adjoining seven-story Indiana Hotel, the majestic movie palace and vaudeville theater introduced Indiana to the biggest stars of stage and screen. Today, the Embassy is listed on the National Register of Historic Places. Combining the beauty of a bygone era with the energy and diversity of today’s performers, the Embassy is the showplace of Northern Indiana. Many choose to host events and weddings at the Embassy, as it offers flexibility and a unique event experience in an iconic piece of Fort Wayne history. Visit us at fwembassytheatre.org for more information.