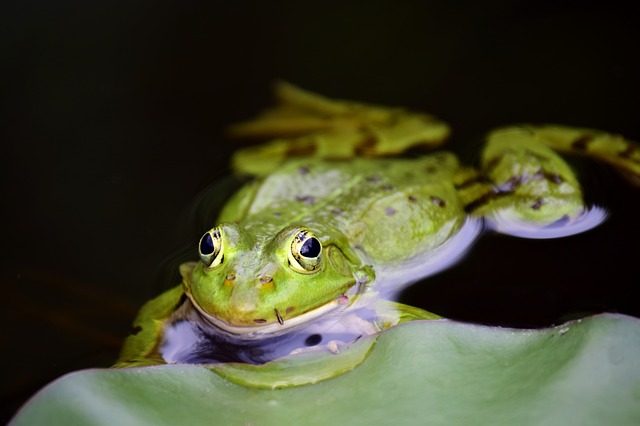 “More than 4,000 species of frogs are found in all continents except Antarctica, and more than 90 species are found here in the United States,” said Tom Samra, Vice President, Facilities, U.S. Postal Service and dedicating official at the stamp ceremony. “Frogs play an important role, not only in their natural habitat, but to our daily lives. As tadpoles they feed on algae, which helps keep the water clean, and as adults, they feed on insects, which helps to control bug populations.”

Working with a primarily green color palette and minimal detail, artist Nancy Stahl captured the essence of each frog with enough important defining features to make them recognizable. The subtle changes to the many green tones—with details including spots, underbelly, and toes in shades of brown—accentuate the differences among the four frogs. Art director William J. Gicker designed the stamps.

Found throughout the western United States, the Pacific tree frog or Pacific chorus frog (Pseudacris regilla, pictured at lower right) grows no larger than two inches in length and may be one of the world’s most widely heard frogs. Nicknamed the “Hollywood frog,” its calls—rib-bit, rib-bit—have been recorded for use as background noise for nighttime scenes in countless television shows and movies, even those set far from the frog’s actual range.

Growing to an adult size of between two and five inches in length, the northern leopard frog (Rana pipiens, upper right) can be found across the northern United States and as far south as New Mexico. Varying in color from green to tan with a light underbelly and light borders that sometimes appear around its spots, this frog is most commonly identified by its highly distinctive call, a rattle-like snoring noise that can last three seconds or longer, followed by several notes described as “chuckling” or “clucking.”

Typically bright green, the American green tree frog (Hyla cinerea, lower left) grows to be no larger than two and a half inches long. Known to live as far north as Delaware and Illinois, this frog can be found in ponds, lakes, and swamps throughout the southeastern United States and along the Gulf Coast, where its call is one of the most distinctive in its range. Because the American green tree frog forms large choruses after warm rains, it is sometimes called the rain frog, but others have dubbed it the cowbell frog based on the sound of its short call when heard from a distance.

Found from southeastern Virginia down through Florida and west along the Gulf Coast to Texas, the squirrel tree frog (Hyla squirella, upper left) earns its name from a raspy, quack-like call that resembles the scolding noise of a gray squirrel. Its coloring varies greatly from brown to rich green. Growing no larger than one and five-eighths of an inch long, this little frog is often spotted when it hunts for insects at night among patio lights. On summer evenings, large choruses of squirrel tree frogs form in pools and roadside ditches.

Customers may purchase the Frogs stamps at The Postal Store at usps.com/shop, by calling 800-STAMP24 (800-782-6724), by mail through USA Philatelic, or at Post Office locations nationwide. Forever stamps will always be equal in value to the current First-Class Mail 1-ounce price. Information on ordering first-day-of-issue postmarks and covers is at usps.com/shop under “Collectors.” A video of the ceremony will be available on Facebook.com/usps.