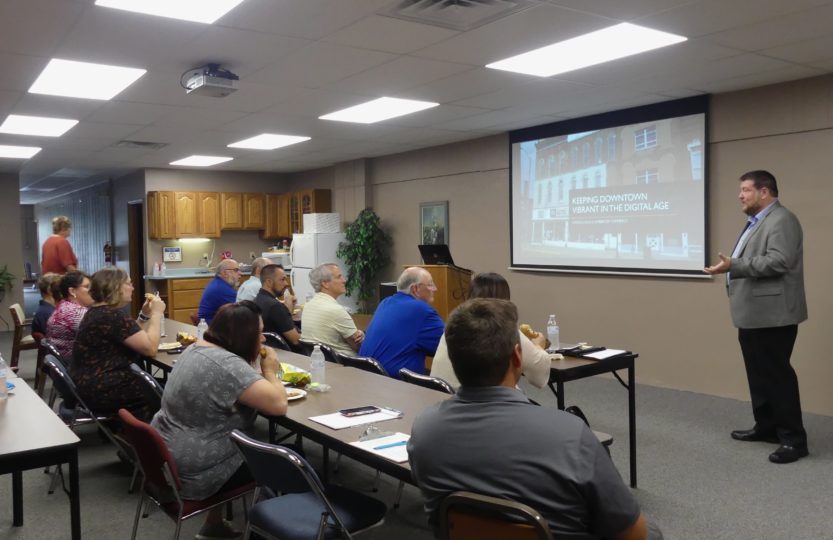 The meeting space at the Kendallville Area Chamber of Commerce was filled almost to capacity Thursday by civil servants, business owners, economic developers, and others interested in learning more about what it takes to revitalize and transform a downtown corridor to create a bustling place to eat, shop, and play.

Most who attended enjoyed lunch while John Bry, former executive director of the Noble County Convention and Visitors Bureau, now at the helm of the Oakland County Main Street program in metro Detroit, spoke. Oakland County’s is the only county-wide Main Street program in the nation. Bry is a Certified Main Street Manager and has been working in the industry for about 23 years, the last three for Oakland County. During his time at Noble County’s tourism bureau, Bry began introducing many of the tenets of the National Main Street Center, a program launched by the National Trust for Historic Preservation in 1980, to local community leaders. Perhaps the most encouraging point Bry made during his presentation is that progress can be slow and that’s okay. He encouraged attendees that changes that work and that last require extensive planning, collaboration, a thoughtful strategy, and patience.

Evidence of some of the seeds Bry planted and nourished during his tenure in Noble County can be seen in every local community. Art murals, changing art projects (like the Adirondack chairs in downtown Kendallville this summer), parklets, trails, alleyway upgrades (or "activations") and diverse events that bring people downtown are the kinds of things that drive revitalization of areas previously devastated by the arrival of big box stores and strip malls during a wave of urban development.

Bry says the new "digital age" of commerce is not really affecting most downtown districts. Rather, he says, the big department stores and strip malls are suffering the impacts of online retail sales more than the locally-owned small businesses like those that occupy many of Noble County’s downtown spaces. Furthermore, Bry reported, small businesses have a great opportunity to use digital resources to expand their businesses online and smaller, vacant downtown spaces are being sought after by digital start-ups who don’t need a lot of square footage.

Marketing can be a challenge for small businesses and Bry says a good Main Street plan includes resources to help. The Oakland Main Street Program offers a free series of marketing and advertising workshops they call a "boot camp". Other workshops and consulting services are among many of the things his organization provides to help spur growth and prosperity. Those efforts, though, require well-planned program considerations including design, organization, promotion, and economic vitality. Bry refers to these fundamentals as "DOPE" and says they are critical to success.

As he dove deeper into each element of DOPE, Bry emphasized the need for a strong organization to lead the way, one that knows how to raise funds by connecting to both public and private investors. He said most programs operate as 501(c)3 non-profit organizations. Some work under the umbrella of a chamber of commerce or development organization while others are stand-alone entities.

Bry also offered ideas to help build momentum. Creating a property sheet, for example, provides a collateral piece that can be used to market what is unique and already available in the destination and build interest as it improves. Creating an image campaign is another suggested strategy. An image campaign might be used to manage a common misconception about a place or to highlight a little-known or recognized characteristic. Bry said one community in Oakland County conducted an image campaign to highlight the fact that a majority of their downtown businesses are owned by women.

When faced with naysayers, Bry firmly suggests to "never let them stop the train!"

Bry suggests the 20% who "hate it" should not stop the momentum. Planners should keep reaching out to them to join along because for some, change is just hard. But change that doesn’t happen, he says, is "death" for small towns. As Bry wrapped up his presentation he emphasized two tenets of Oakland’s program that he says he brought to the table. First, flexibility, he said, is important. Not every plan has to be in the same format to work. Bry suggests that communities look at lots of other plans and to get outside of their own community and region.

"There is a whole world out there beyond Noble County to learn from," Bry explained. "Come see me in Oakland County!"

If the plan that feels right is structured differently than a neighboring community, that’s okay with Bry. What is more important, he says, is that there be a plan and that it be followed and updated to meet the changing environment. Bry said he is working with one community now whose master plan is 30 years old. That, he says, should be avoided. He also emphasized how important it is for any plan to draw upon what is already in the community and appeal to the community’s wants, likes, and needs, and not rely too heavily on people to travel in to make it succeed. Striking a balance is important.Copying the same features in every neighboring community is less likely to succeed than when each community embraces what is unique in their own place, be it architecture, history, natural amenities, an already-thriving business, or something else that neighbors don’t already highlight.

Not only do people forget, but new people move in, new officials are elected, and sometimes what a community may think is common knowledge about the history of a place or project needs to be repeated. It may take years for change to happen and over time people may forget or arrive in the middle of long-term transformations. Bry says to be patient, take time, do it right, and to reflect on how things used to be. Storytelling can be a powerful tool to keep momentum going and bring new energy to the effort.

Kristen Johnson, executive director of the Kendallville Chamber, said she was pleased with the presentation and attendance and believes Noble County is on the right track.

"I was thrilled to have John come down and present his expertise to us", Johnson said. "I think we can all see the changes taking place in our downtowns in Noble County. Some of what has already been done, with more to come, really fits the Main Street model."

Those seeking to connect with Bry or seek out other resources available to support downtown development and revitalization may contact the Noble County Economic Development Corporation at 260-636-3800 for assistance. 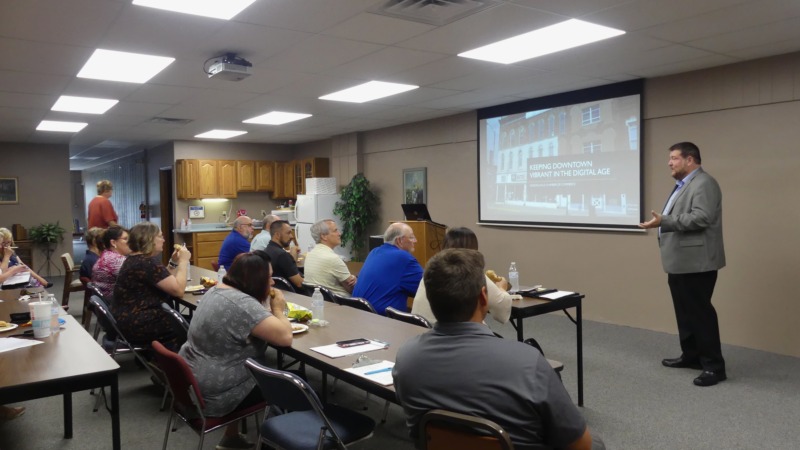