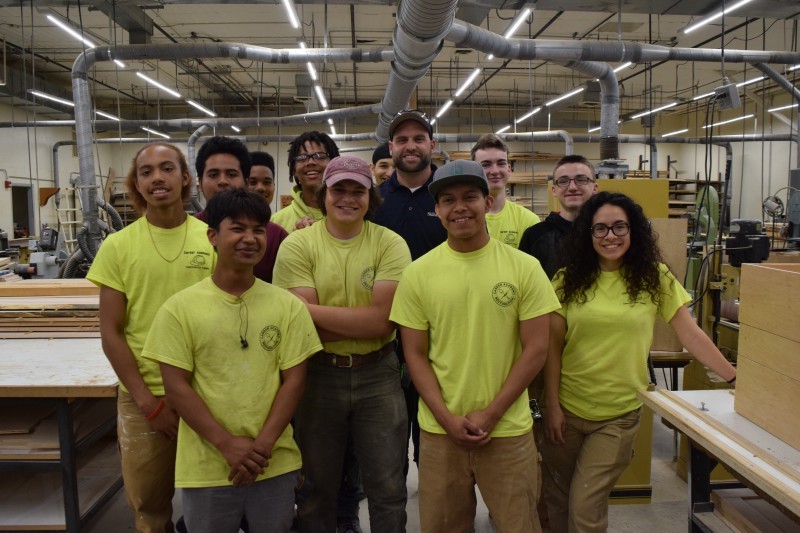 Christopher Roberts, Construction Trades Instructor at the FWCS Career Academy, has been named the 2019 Fort Wayne Community Schools Teacher of the Year.

Roberts began his teaching career 13 years ago and has expanded the Construction Trades program in several areas. Ten years ago, Construction Trades students began working over the summer with the City of Fort Wayne to put in sidewalks and curbs. For some students, it later turned in to full-time employment with the city. Roberts also led the renovation of the building at 125 Murray St., partnering with local businesses and working with students to complete much of the renovation work.

He was selected as Teacher of the Year because of his efforts to connect students with community organizations and his enthusiasm for giving students opportunities, particularly when they struggled in a traditional school environment.

“My philosophy is to fill every day with 100 percent of energetic activity,” he said. “I don’t allow the students to rest. We’re developing a work ethic, and we’ve got work to do before they graduate.”

That work begins in the classroom but takes students into the real world by building a house each year and completing projects for teachers in Fort Wayne Community Schools, such as building shelves for classrooms or pouring concrete for outdoor projects, among other projects. When students leave his classroom, they often are quickly hired by local businesses, who know the high skill level they learned at the FWCS Career Academy.

“I have a pursuit for perfectionism with my students,” Roberts said. “I can be a mentor. I can be a coach. I can be someone to cheer them on. I’ll do anything possible for my students.”

Superintendent Dr. Wendy Robinson said Roberts’ ability to connect with students and build their passion for a future career is key to his success as a teacher.

“Our students have unlimited options, and our job is to show them how they can be successful in the career they choose,” Dr. Robinson said. “Chris has shown hundreds of students how construction skills can be useful in their lives, whether it is as a career, as a life skill or as a hobby. More importantly, he has instilled in them a strong work ethic and confidence to be successful at whatever they pursue.”