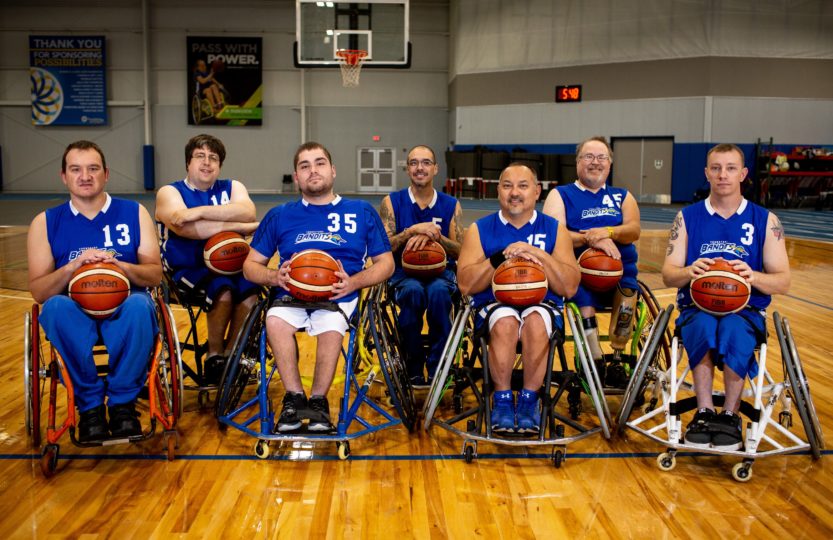 The prep wheelchair basketball team ended their season ranked #5 out of 35 teams nationally (ages 8-13) with a record of 18-1. They will be competing March 29th – 31st in New Lenox, IL at the National Wheelchair Basketball Association Tournament.

The Turnstone Bandits, adult wheelchair basketball team, completed their season with a record of 8-8, ranking 15th nationally. They will be competing April 5th – 7th in Chicago, IL in the National Wheelchair Basketball Association Tournament.

The sled hockey team ended their season with a record of 8-12. These athletes will be competing in Wesley Chapel, FL from April 4th – 7th in the Disabled Hockey Festival.

“The Turnstone Bandits are extremely grateful to be invited to the Division III wheelchair basketball finals in Chicago on April 4th,” said Shane McVoy, Bandits Head Coach. “To be considered one of the top 16 teams in the country in our division is truly an honor.”

“We have fought hard all year and have battled injuries and health issues to key players. We have added 2 youth players, Cai Davis and Elliot Mohre. Both of these guys have improved dramatically and have been welcomed additions to our Sled Hockey family. We have seemed to turn the corner and had our most successful weekend of the year finishing second in the Heartland League tournament this past weekend in Grand Rapids. We look forward to competing in National’s next month in Tampa,” Rick Wynn, Sled Hockey Head Coach, said.

“I have loved watching our teams grow and compete this year,” said Molly Cinker, Turnstone’s Competitive Sports Coordinator. “The National events are what many of us (players and myself) look forward to each year. It is a time for our players to band together and display their skills against some of the best teams in the Nation. It’s an opportunity for our athletes to experience

new competition and grow together.”