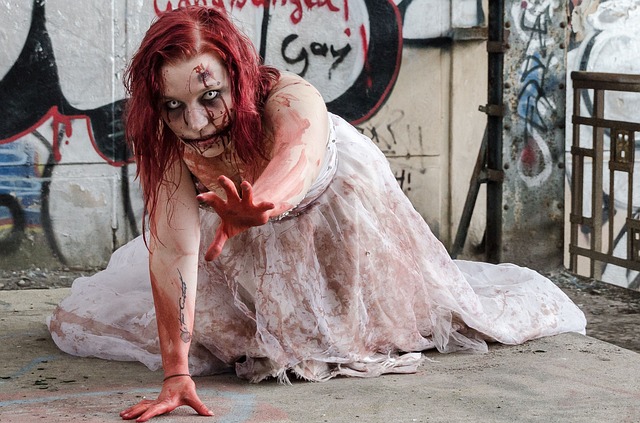 Fort Wayne’s most anticipated Halloween event full of frightful family fun is back! Fright Night, presented by First Federal Bank and your Downtown Improvement District, returns on Saturday, October 20. With more than 35 ghoulishly great activities for people to enjoy throughout the day and evening, Fright Night has something for everyone!

“Fright Night gets bigger and better every year!” said Downtown Improvement District President, Bill Brown. “All the partners work very hard to produce a fantastic event that is fun for all ages. So come to Downtown Fort Wayne for an experience you won’t find anywhere else.”

Before you join the ranks of the undead in this year’s “Zombie Walk” don’t forget to check out the pre-parade activities all around Downtown. Then head to ACPL Plaza for all the zombie fueled mayhem! From the T.A.G. Art Zombie Machine and First Federal Bank Photo Booooth to great live dance and musical performances as well as the annual Brain (cake) Eating Contest! Then, at 5:30pm, we kick off the Zombie Walk— your chance to be part of the biggest zombie parade around as it crawls its way through the streets of Downtown Fort Wayne!

2018 MONSTER DASH: The UAW Local 2209 would like to invite everybody to bring the entire family and join them in the Monster Dash 5k Fun Run/Walk on October 20th at 10 a.m. This Halloween-themed fundraiser to benefit Fort Wayne Trails will start and finish in historic Freimann Square in Downtown Fort Wayne. So, bring your funniest, spookiest or most epic costume and be ready to hit the trail!

VAMPIRE MADNESS: Join Cinema Center for some bloody fun! Kids stop by between 10am and 1pm for a free vampire craft and treat! 11 AM family friendly Halloween movie (title TBA). Tickets are just $5! For the rest of their creatures of the night – vampire themed films will screen in the afternoon and evening. Check the website for titles, pricing and schedule.

Join First Federal Bank, on the ACPL Plaza, beginning at 2pm as they host professional carvers from Ice Creations for ongoing demonstrations of extreme pumpkin carving and a display of their pumpkin creations that have even been featured on Food Network. Plus, enter to win one to take home.

PHANTOM OF THE ORGAN

Spine-tingling music played on the mighty pipe organ at Trinity Episcopal Church. Organist, Wayne Peterson, will be joined by singer David Dilsizian (Grand Rapids), and other guests, to present a frighteningly fun event for all ages!

Are you a zombie? Can you sing, dance or tell a great joke? Do you feel that the other zombies don’t appreciate your unique talents? This competition for zombies and monsters at the Allen County Public Library is your chance to shine!