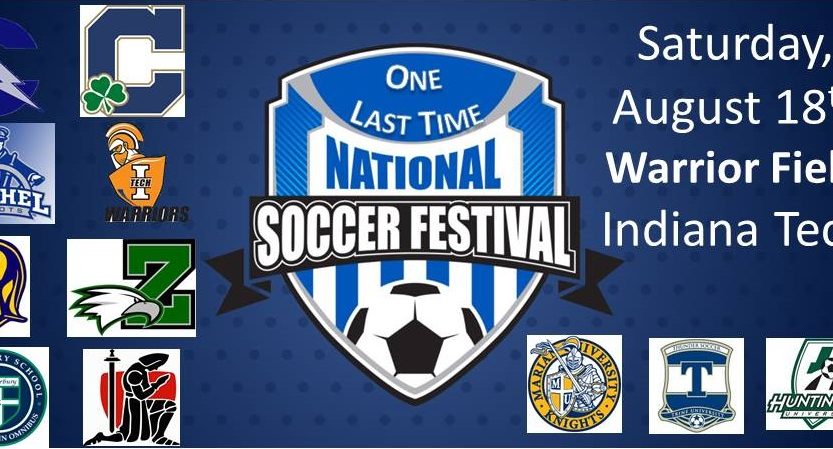 The National Soccer Festival will once again return to Northeast Indiana for its 20th and final year on Friday and Saturday, August 17th & 18th. The festival will include two sites in 2018: the University of Saint Francis and Indiana Tech. Top-notch high school and collegiate teams will again participate in the National Soccer Festival, including Michigan State and Indiana, who have both appeared at every single festival since its inception in 1999. Full schedules are now available online at www.NationalSoccerFestival.com . Tickets can be purchased in advance at Fort Wayne-area Connolly’s Do It Best Hardware locations and Soccer Plus. As in years past, tickets can also be purchased at the gate on the days of the event.

On Saturday, August 18th, an entire day of both high school and collegiate soccer will be featured at Indiana Tech’s Warrior Field. The day begins at 8:00 a.m. with boys prep action as Carroll High School takes on Cathedral High School (Indianapolis) followed by a women’s collegiate match between Indiana Tech and Bethel College at 11:00 a.m. Boys prep action will fill the afternoon as Homestead High School faces Zionsville High School at 1:00 p.m. followed by Canterbury High School taking on Bishop Luers High School at 3:00 p.m. Girls prep action takes over Warrior Field as Canterbury High School battles Bishop Luers High School starting at 5:00 p.m. The evening will culminate with men’s collegiate soccer as Indiana Tech takes on Marian University at 7:00 p.m. The Festival will “ride off into the sunset” with a final game starting at 9:00 p.m. when the Trine University women will battle Huntington University in the final match ever of the National Soccer Festival. Schedules are subject to change.

What humbly began in 1999, became the nationally known phenomenon of the National Soccer Festival. What was merely a soccer event turned into a full-fledged, grass roots community supported soccer celebration. Corporations, foundations and personal donations were the backbone of the Festival. The beneficiaries of the event were the city of Fort Wayne for the national recognition it received; the area youth for the hands-on interaction with the soccer players and coaches from major national universities; the local businesses of northeast Indiana, for the added commerce brought to the region; the area universities, for the added exposure and the average Fort Wayne citizen who knew nothing about the game, but loved to have fun in a family-oriented atmosphere.

The National Soccer Festival, during its 20-year run, evolved into a true community soccer celebration, including panel discussions with major university coaches, wide ranges of live entertainment, opportunities for youth involvement, food vendors and giveaway prizes; excellent locations including the historical Fort Wayne Sport Club, Hefner Fields at IPFW, Warrior Field at Indiana Tech, Weaver Soccer Field at Trine University and the state-of-the-art Bishop John D’Arcy stadium on the stellar campus of the University of Saint Francis. The National Soccer Festival is honoured again, in this final year, to bring back top-ranked Indiana University and Michigan State University to come full-circle, along with highly prestigious high school teams, to Fort Wayne. Due to its great history, the National Soccer Festival has been recognized nationally as the premier event to attend for pre-season collegiate soccer, but will end this status after 20 years.