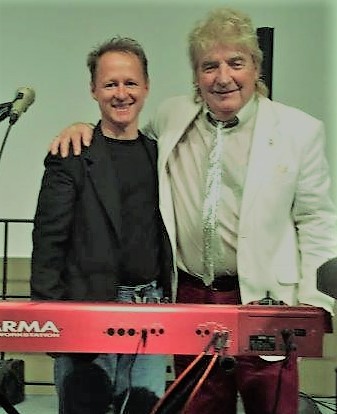 The new season of shows at Roanoke’s COTTAGE EVENT CENTER kicks off with the return of a pair of spectacular keyboardists, each with a long list of credentials. The event, the venue’s sixth annual fund raiser for the Roanoke Lions Club, is scheduled for Friday, August 25th, with the show beginning at 7:30 PM. As in previous years, the Roanoke Lions Club will be on site grilling burgers for purchase.

The concert will feature a varied assortment of musical styles, including songs made famous by artists like Jerry Lee Lewis, Frank Sinatra, Elvis, and Michael Jackson.

THE DUELING KEYBOARD BOYS are made up of PAUL NEW STEWART and BRIAN FRUSHOUR. Stewart, known to Event Center audiences for his rockabilly piano work with guitarist Kenny Taylor, is a veteran of the music industry both on and off stage. He has performed with national acts including Frankie Avalon, The Coasters, Charlie Rich, Nancy Sinatra and Fats Domino. He appeared on the MIKE DOUGLAS TV show and was part of Dick Clark’s original Bandstand program based in Philadelphia. He was a stand-in for actor Kurt Russell on the TV movie ELVIS, sang at 7 different major league playoff games for the Pittsburgh Pirates, and sang for Willie Mays’ induction ceremony into the Baseball Hall of Fame.

After moving to Fort Wayne in the 1980’s Stewart managed the Pierre’s nightspot, and also joined with singer Chris Worth to form the popular CHRIS & PAUL nightclub act.

BRIAN FRUSHOUR has performed keyboards a 5 Star venues throughout China and Japan, and worked as a Promenade Soloist for Carnival Cruise Lines. He performed with the rock band, Mindshank, which recorded two albums. He is a graduate of Saint Francis University with a degree in Music Technology, and currently works for Sweetwater Sound.

Tickets are $12 and may be purchased by call 260-483-3508. They may also be ordered online at cottageeventcenter.com, or at JOHN’S MEAT MARKET in Roanoke. The event is sponsored by BIPPUS STATE BAND and Larry Elliot Insurance.

Other upcoming shows at the Cottage Event Center include the Event Center debut of The Alicia Pyle Quartet September 22 for Riley Hospital, Husband-Wife duo THE J TAYLORS October 20, and a TOYS FOR TOTS Holiday Concert December 1 starring SHANNON PERSINGER & THE ERIC CLANCY TRIO. On New Year’s Eve popular crooners THE BRAT PACK will perform from 7-10 PM in an evening of Dinner and Music.

Doors open at 6:30. Cash bar and food is available for purchase. The Cottage Event Center is owned and operated by Hamilton Hospitality Group.