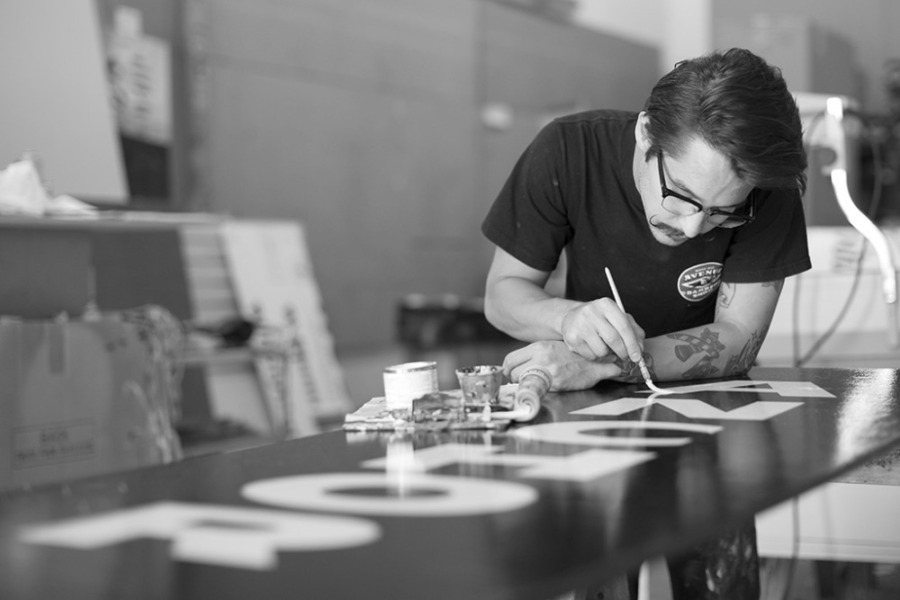 Tolon, Fort Wayne’s premier farm-to-table restaurant on The Landing will soon be featuring a glittering new addition to their historic façade. Owners Nicky and Matt Nolot have hired Justin Lim, founder of Old Five and Dime Sign Company, to create custom 23-karat window signage for them using the time-honored technique of gold leaf lettering. The project is set to happen on May 23-24.

Until recently, this craft – a painstaking process – was nearly extinct, as the advent of cheap, readilyavailable vinyl decals pushed out both the art form and the artist in what had been a centuries-old trade. Vinyl, however, cannot duplicate the real thing at all. Lim, already known throughout the city for his hip, old-school-meets-edgy style, will team up with longtime local sign artist James Mitchell for the project. The two carefully and skillfully lay extremely thin, fragile sheets of 23 karat gold leaf to the glass with what is known as a gelatin gilding method – applying them to the wetted surface and precisely flattening them in place with the solution. Next, each character is outlined, and any excess is just as carefully removed after it dries. This amazing process creates lettering with a deep, glimmering mirror-like effect that will not tarnish or fade. “It’s an ancient technique,” Lim says, adding that it’s perfect for Tolon’s building. “It fits with the movement downtown, the nostalgic trend…its character and soul.” Given the complexity, it’s no surprise that gold leaf window lettering is regarded as the peak of advertising luxury. And it’s also no surprise that the restauranteurs chose this for their unique, upscale establishment. “It’s a lost art…no one has it anymore,” says owner Nicky Nolot. “We’ve brought something back to Fort Wayne – reintroducing what food should be. Tolon was the first to open here with farm-to-table offerings, and everything about our restaurant is about ‘Local’. It just made sense to continue that theme with Justin, James and their movement toward bringing something lost back to the

Work on the windows will commence on May 23. Lim estimates it will take approximately two days of design work plus three days on site to complete the project. This story will be of great interest to the public from several perspectives: the partnership of two unique local businesses; the “lost art” of hand-lettered window painting; and the downtown development and historically-minded attraction as well.