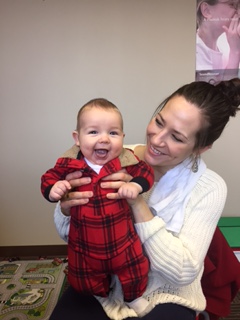 Of every 1,000 babies born in the United States, between one and three has detectable hearing loss in one or both ears. Early diagnosis and treatment, however, can be extremely effective. Current research suggests that children who begin treatment before they are six months old typically develop language – either spoken or signed — at the same pace as their hearing peers.

Fort Wayne mom Jillian Warner can attest to the benefits of early diagnosis and treatment.

Warner’s youngest son, Simon, failed his newborn hearing screen in the hospital and was referred for follow-up testing with an audiologist. Warner, who happens to be a neonatal intensive care nurse, said she wasn’t terribly alarmed at first. It’s not uncommon for newborns to fail their hospital hearing screen due to excess fluid in the ears, she said. Unfortunately, the follow-up appointment didn’t go as Warner had expected, and she soon learned that Simon had mild to moderate hearing loss in both ears. “I was kind of numb,” she said. “I didn’t even want to call and tell my husband right away."

The next few weeks were a bit of a whirlwind, but Warner soon realized that there is plenty of help available. Dr. Tina Sheehan, a licensed audiologist with HearCare Connection, Inc., began working with Simon, who was fitted for his first set of hearing aids at three months. Dr. Sheehan explained that without hearing aids, Simon may be able to hear sounds, but the clarity of those sounds may be affected. He might hear noise when someone drops a set of keys, for example, but he wouldn’t necessarily be able to identify the nature of that specific sound.

It’s important for parents to understand that children’s brains develop quite rapidly between birth and three years of age. Undiagnosed hearing loss could result in developmental delays. “If you don’t get on it right away, you miss out on those golden years,” Warner said.

Simon, who is now 17-months-old, is now testing ahead of the curve in terms of language development. “I really think early treatment was key,” Warner said. “It really helped Simon hear those sounds from the very start HOW he needed to hear them."

Warner urges other parents to test early if they suspect their child is having trouble hearing. “If you know, you can help them from the start,” she said. “You don’t have to go through the time and pain and energy of trying to help them catch up later on. You never want to see your own child struggle.”

If you recognize these signs in your child, contact your audiologist;

• Not being startled by loud sounds

• Not turning toward the sound of a voice

• Not babbling by the time he’s 1 year old