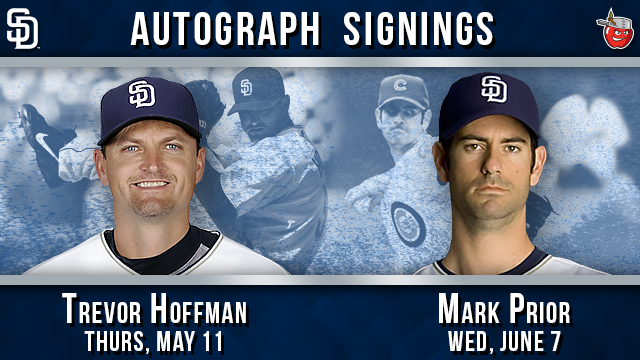 Former Major League Baseball All-Stars Trevor Hoffman and Mark Prior—both of whom now work for the San Diego Padres—soon will be visiting Parkview Field and signing autographs for fans at TinCaps games.

Hoffman, who ranks second in saves in MLB history with 601, will be in Fort Wayne when the TinCaps host the Beloit Snappers (Oakland A’s) on Thursday, May 11 at 7:05 p.m. Hoffman is currently a Senior Advisor to Baseball Operations with the Padres.

Prior, who had the highest WAR among National League pitchers in 2003 with the Chicago Cubs, will be at Parkview Field on Wednesday, June 7, as the TinCaps take on the Lake County Captains (Cleveland Indians) at 7:05 p.m. Prior is San Diego’s Minor League Pitching Coordinator.

“We can’t wait to have Trevor and Mark join us at Parkview Field,” said TinCaps President Mike Nutter. “Fans know them as two of the most talented pitchers we’ve seen in the big leagues over the last 25 years, but what really separates them from others and has led to their success after retirement as pitchers is how they’re first-class and high-character people.”

On their respective nights, Hoffman and Prior will sign autographs for fans on the concourse before the game. They’ll also meet with local reporters and join the TinCaps’ TV and radio broadcasts on Comcast Network 81 and ESPN Radio 1380 & 100.9 FM.

“Fans will love getting to meet them both,” Nutter said. “With their busy work and family schedules, we’re appreciative of their time and generosity, and to the Padres for helping to make this happen.”

Fort Wayne has been San Diego’s Midwest League affiliate since 1999. Last September, the TinCaps and Padres renewed their Player Development Contract through the 2018 season. Moisés Alou and Mark Loretta, two other past MLB All-Stars who work for the Padres now also, are expected to visit Parkview Field in a similar fashion later this season as well.