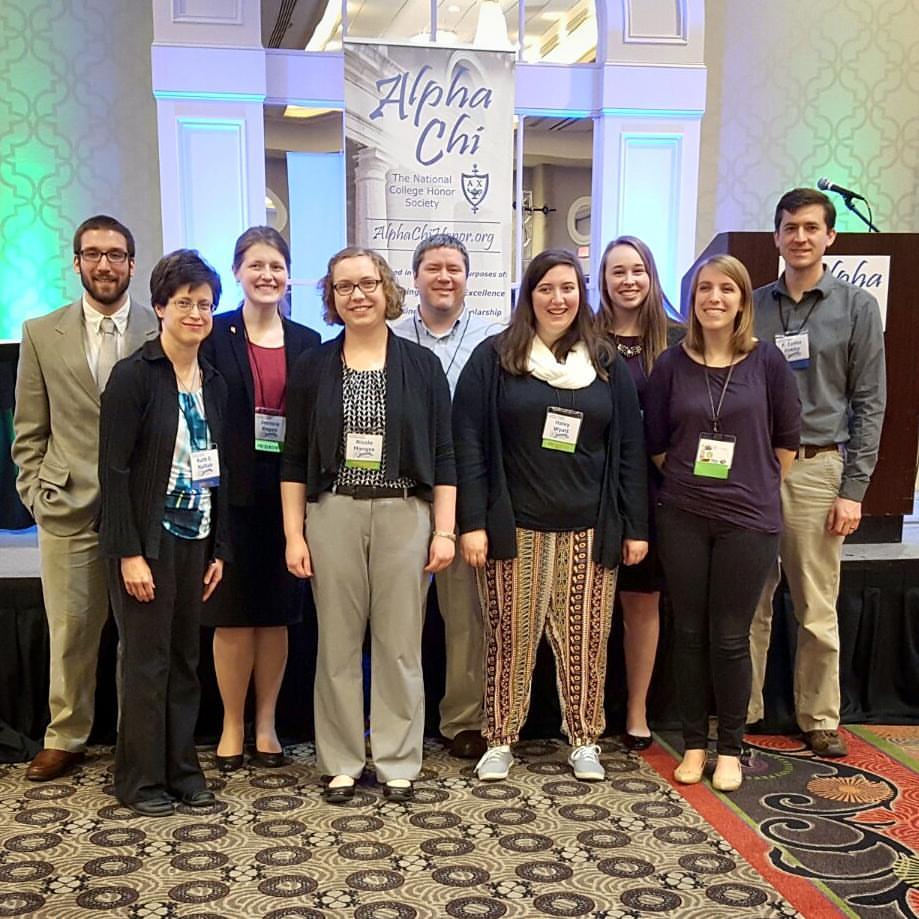 Huntington University’s Indiana Beta Chapter of the Alpha Chi National College Honor Society garnered awards for student scholarship at the Alpha Chi National Convention held in Louisville, Kentucky on April 6-8. The chapter received recognition at the convention as a Star Chapter of Alpha Chi for 2016-2017, being one of only four out of the more than 300 Alpha Chi chapters to have received this award every year since the honor was launched in 1996.

Six student members of the Huntington University chapter attended the convention, and each presented their work:

. Sarah Gruenewald, a senior English writing and public relations major from Millstadt, Illinois; “Women in Charge: Power Dynamics of a Small Midwestern Affiliate of an International Nonprofit with Women in Superior Positions and Men in Subordinate Positions”

. Jeniece Regan, a junior biology pre-med major from New Haven, Indiana; “Common Ground: The Influence of Jewish Heritage on the Effectiveness of the Apostle Paul’s and Justin Martyr’s Circumcision Arguments”

Of these presenters, Jeniece Regan won a regional scholarship for her paper on “Common Ground: The Influence of Jewish Heritage on the Effectiveness of the Apostle Paul’s and Justin Martyr’s Circumcision Arguments” and Isaiah Gerber was selected as an alternate recipient for a regional fellowship for his paper “God and Personality: Effects of Religious Commitment, Personality and Attachment Upon Trait Forgiveness.”

“Our students find it rewarding to present original works of scholarship at a national convention hosting the top ten percent of students from around the nation, and are encouraged when their scholarship gains recognition at this convention,” said Nalliah. “It is encouraging to see Huntington University faculty actively challenging students to achieve this type of growth.”

Election to Alpha Chi is the highest academic honor at Huntington University. The HU chapter has been recognized as the national outstanding Alpha Chi chapter with The President’s Cup twice, in 2015 and in 2001. Only one other chapter has won the award twice. Alpha Chi is a national honor society consisting of the top ten percent of junior and senior students in all academic disciplines, and is dedicated to “making scholarship effective for good.”