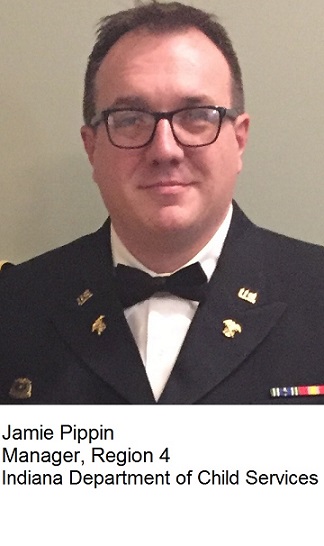 The Indiana Department of Child Services (DCS) has appointed Jamie Pippin as Manager of Region 4. In this role, he will provide broad oversight and supervision for the Region 4 area, which includes Allen, Adams, DeKalb, Huntington, LaGrange, Noble, Steuben Wells, and Whitley Counties. Also, he will serve as a field representative to the DCS’ central office in Indianapolis and communicate local office needs. Other duties include supervising the directors of the Region 4 county offices while also developing and administering budgets.

“Jamie brings years of child welfare field experience to the position,” said Jane Bisbee, DCS’ deputy director of Field Operations. “We are pleased to have him in this new role.”

Originally from Illinois and raised in North Carolina, Pippin now considers himself a Hoosier having spent the last 21 years in Indiana.

In 2006, Pippin began his DCS career in Elkhart County as a Family Case Manager (FCM) in Assessments, evaluating allegations of abuse or neglect. He has also been a FCM Supervisor in Elkhart County, Local Office Director in the neighboring Noble County, and most recently the Manager of Region 3, which includes Elkhart, Kosciusko, Marshall, and St. Joseph Counties.

Pippin has a Bachelor of Arts degree in Social Sciences from Tri-State (Trine) University. In 2005, he received his Master of Public Management degree from Indiana University-Purdue University in Fort Wayne. Currently, he is working on a Doctorate in Public Administration. He is also an Indiana National Guardsman.

Pippin will be based in the Allen County office, located at 201 E. Rudisill Boulevard in Fort Wayne, Indiana.