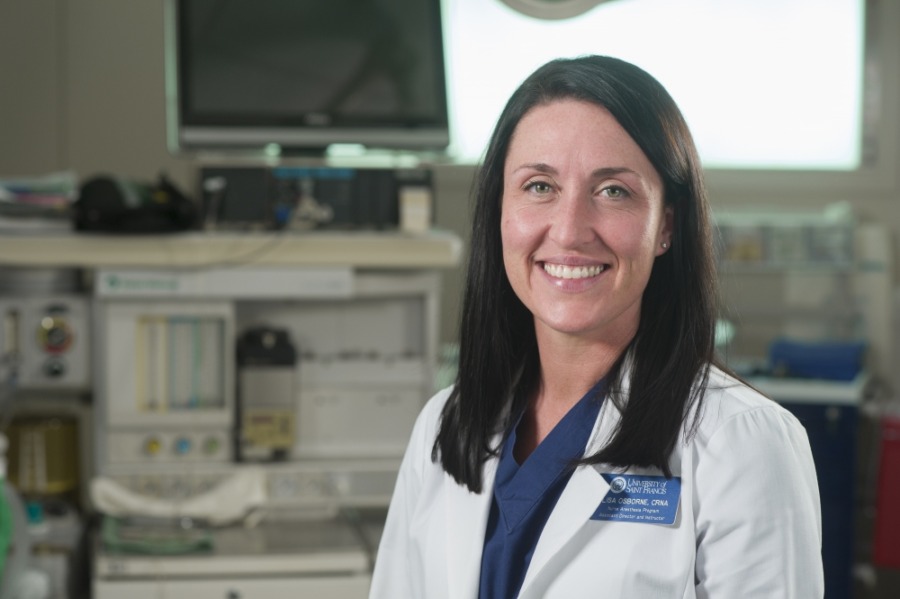 The University of Saint Francis has launched a Doctor of Nursing Practice (DNP) program with two tracks including a Certified Registered Nurse Anesthetist (CRNA) option. There is currently no DNP-CRNA program in Indiana. The CRNA program’s accreditation is expected to be finalized this spring by the Council on Accreditation of Nurse Anesthesia Educational Programs. The university has already received approval by the Higher Learning Commission. Based on USF’s current plan, the first CRNA cohort will begin in fall 2017.

The DNP is the University of Saint Francis’ first doctoral degree program. USF President Sister M. Elise Kriss OSF said, “We are very proud of the university’s tradition of producing leaders in Nursing. It is fitting that our first doctoral offering be in healthcare programs where nearly50 percent of our student body resides. With this new program, our 127 year history of education continues to grow stronger.”

Program Director Dr. Marquessa Fisher came to USF to launch the program via the University of Miami, where she taught and was a clinical faculty member. “It’s a 36-month rigorous continuous program, with didactic (classroom) and clinical elements,” states Fisher. Students perform a minimum of 2,000 operating room hours and log 600 cases spanning each specialty area, such as open heart, thoracic, obstetrical and pediatric surgery.

The DNP program is under the leadership of Dr. Wendy Clark, Graduate Nursing Program Director and the Dean of the School of Health Sciences, Dr. Mindy Yoder. Practicing professionals can pursue a BSN-DNP Nurse Anesthesia program which provides bachelor’s-prepared nurses with a practice doctorate so they can become nurse anesthetists, leaders and educators. Alternatively, students can earn the Post-MSN Doctor of Nursing Practice, which allows graduates who have earned a Master of Science in Nursing a chance to increase their skills with a focus on population health. “The DNP in population health supports existing research in northeast Indiana. Graduates of the program will apply innovation and best practices to improve the health of our community,” said Dr. Clark. Nursing professionals interested in applying to the program should visit sf.edu for more information.

The USF School of Health Sciences is comprised of 67 experienced healthcare professionals, many of whom are currently working in medical facilities or in their own practices and approximately 1,000 students. An additional faculty member is being sought to begin teaching this fall, when the DNP program commences.

Dr. Yoder earned her bachelor and master degrees from Indiana Wesleyan University in 1992 and 1996 respectively. She completed a Doctor of Nursing Practice (DNP) at the University of Minnesota in 2011. She has published and presented primarily in the areas of patient safety and interprofessional education. She has worked in inpatient, primary care, long term care, and occupational health settings. She has been in nursing faculty and administrative roles at the University of Saint Francis for the past 15 years and currently serves as the Dean of the

Dr. Clark earned her bachelor degree from Indiana University School of Nursing in 1993. After working in the intensive care arena, she earned a Master of Science in Nursing Family, Nurse Practitioner in 2001 at the University of Saint Francis. Dr. Clark maintains a private practice in primary care and joined academia in 2005. She completed a Doctor of Nursing Practice (DNP) from the University of Miami in 2013. She has been the Project Director for an HRSA Academic Education in Nursing Traineeship grant since 2012. She currently serves as the Graduate Nursing Program Director at the University of Saint Francis.

Dr. Fisher earned her bachelor degree in 1999 from the University of Louisville in Kentucky and, in 2005, graduated from the Trover Foundation/Murray State University Program of Nurse

Anesthesia and received a Doctor of Nursing Practice (DNP) from the University of Miami in 2013. In February 2015, Fisher assisted in designing the USF nurse anesthesia program. Fisher was appointed Program Director for the University of Saint Francis Nurse Anesthesia Program in 2016.

Osborne completed her undergraduate studies at USF in 2007 and worked as a critical care pediatric and neonatal nurse. She earned her Master of Science in Nurse Anesthesia in 2013, and has been practicing as a Nurse Anesthetist in Fort Wayne for three years. Osborne was appointed Assistant Program Director for the USF Nurse Anesthesia Program in September 2016.