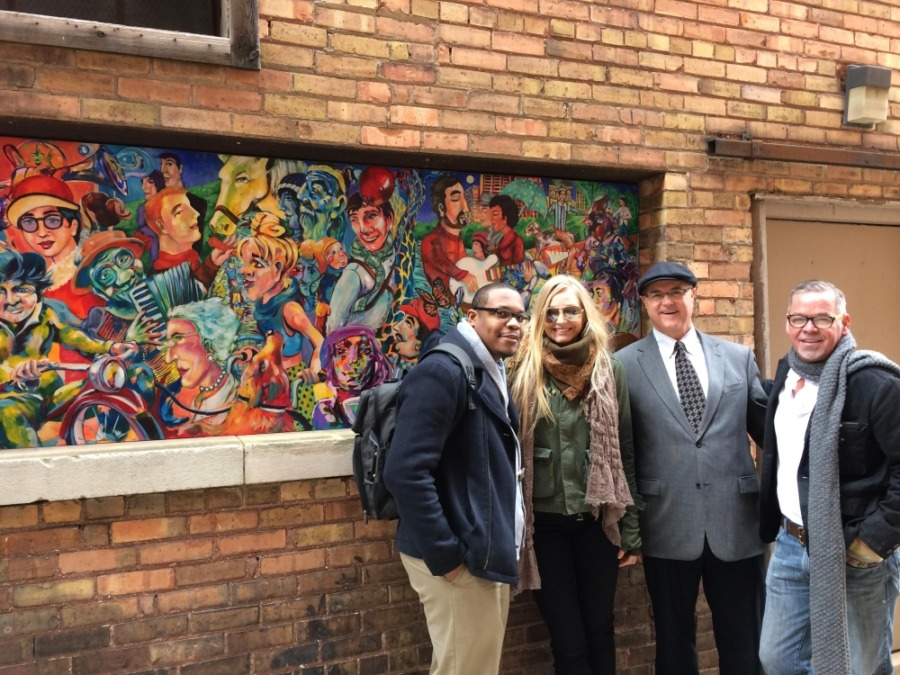 Alleyways aren’t commonly thought of as places to view art. Downtown Fort Wayne, however, is working to change that. “Art This Way” is a new alley activation collaboration in memory of Downtown luminary Christy Landrigan. Christy worked for the Downtown Improvement District and later Lincoln Financial Group, before passing away in an automobile accident in 2016.

It was in 2016 that LFG employees decided they wanted to do something befitting Christy’s creative spirit and love for Downtown. Lincoln Financial Group matched employee contributions dollar for dollar and entrusted the proceeds to the Downtown Improvement District for a commemorative project. The first installation was, Guitar Experiment, a 16-foot-long guitar sculpture built by Alex Mendez and painted by Alexandra Hall which was installed on the alley wall of the MKM building on Wayne Street in October 2016.

The second project, in January of 2017, was the installation of 3 art prints by well know local artist Diane Allen Groenert from her Fort Wayne Landmarks series and a large original collaboration titled People Moving by artists Terry Ratliff, Theoplis Smith and Alexandra Hall in the window frames of the Midtowne Place alley between Washington Blvd. and Wayne Street.

“We are very pleased to be a part of this project!” said Downtown Improvement District President Bill Brown. “Downtown is everyone’s new neighborhood and engagement is about fostering environments where people want to spend time. Through the support of Lincoln Financial Group Employees and the amazing creative work of talented local artists, we are evolving these Downtown alleyways into convivial places where people can appreciate art, share a smile and feel some of the love and optimism about Downtown that Christy exhibited.”

Next steps for the collaboration include an outdoor alley art event as well as the opportunity to own a print of People Moving, the proceeds of which will support future “Art This Way” installations.