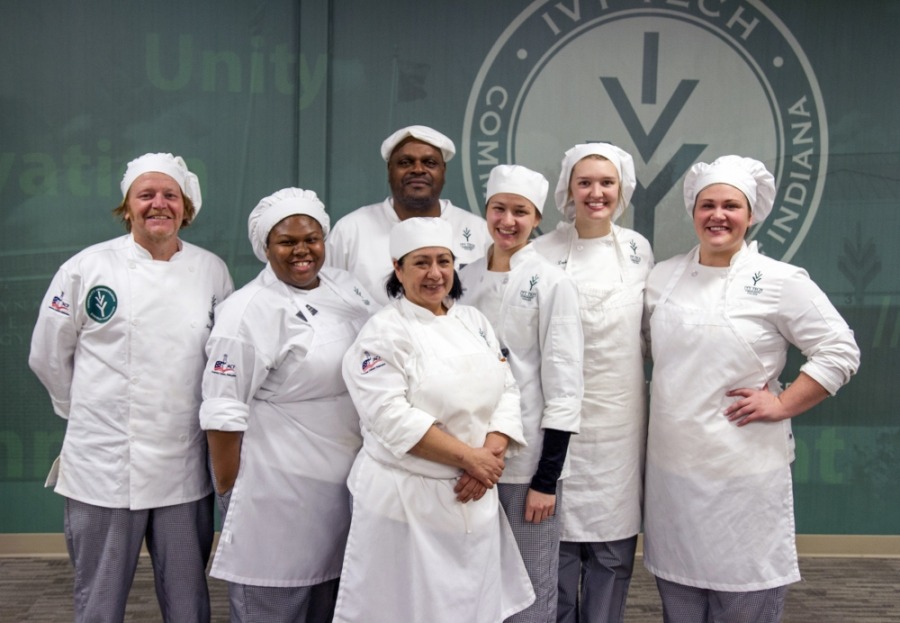 Ivy Tech Community College Northeast hosted its 20th annual European Competition on Friday. Eleven hospitality administration students in culinary arts or baking and pastry arts spent the day competing for a chance to win a scholarship that would pay for a trip to study the culinary arts in France.

Culinary students received a mystery basket of ingredients on-the-spot to turn into an appetizer, entrée, and dessert. They had four hours to compete their task. Baking and pastry students had 4 ½ hours to fill a decorated cake order and complete a fruit dessert, chocolate dessert, and yeast bread with one loaf and six dinner rolls.

Kitchen judges watched and rated students as they worked, paying attention to technique and ability. Floor judges tasted the completed meals, not knowing which student made which plate. The score sheets are based on the College’s accrediting body, the American Culinary Federation.

Winning students will travel to France and Germany this spring to study the culinary arts. Based on what they learn, they will create the menu for this year’s A Reason to Taste, the College’s largest fundraiser.

“It really is priceless, and everyone comes back a changed person,” says Jeff Albertson, interim program chair for Hospitality Administration. “They get cuisine they couldn’t experience in this country.”

Ivy Tech Community College is the state’s largest public postsecondary institution and the nation’s largest singly accredited statewide community college system. Ivy Tech serves nearly 200,000 students annually and has campuses throughout Indiana. It functions as the state’s engine of workforce development, offering affordable degree programs and training that are aligned with the needs of its community along with courses and programs that transfer to other colleges and universities in Indiana. It is accredited by the Higher Learning Commission and a member of the North Central Association.