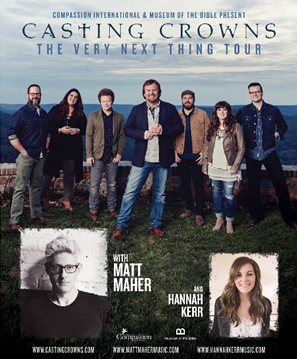 On October 29 Christian mega artist and GRAMMY® winning group Casting Crowns will be performing at the Allen County War Memorial Coliseum for “The Very Next Thing” Tour with special guests Matt Maher and Hannah Kerr. Casting Crowns is the second event in WBCL and Trinity Communications Fall Concert Series. The concert will feature the band’s newest album, “The Very Next Thing,” which was released on September 16.

Casting Crowns got their start in a local church where they were able to walk alongside people in ministry and music. The variety of stories collected by the band members are where they get their inspiration for their albums. “The Very Next Thing” marks the band’s 15th release and eighth studio album. Casting Crowns currently holds the position as Billboard’s top-selling act in Christian music since 2007, with more than nine million records sold.

“Because we have the honor of walking with people in our churches, we get to see what people are going through – the issues that are impacting everyone now,” said front man Mark Hall. “It is in these situations that ideas are born for what we all need to hear right here right now.”

The group’s newest album is compacted with emotional songs in addition to cheerful, positive tracks that connect with every listener through lyrical messages.

Founded in 1982, Trinity Communications has been promoting Christian concerts to share the gospel of Jesus Christ in all forms of media. Casting Crowns addition to the lineup is one you will not want to miss. Tickets can be purchased online at Trinity’s homepage, TrinityCommunications.org, or call 260-484-1029 for information on ordering by phone.