City trail usage saw a third quarter increase of nearly 24,000 trail users compared to past years. A total of 188,711 walkers, joggers and cyclists took to our City trail in the third quarter of 2016– breaking the previous third quarter high mark of 154,828 set in 2012.

The 22% third quarter growth followed the all-time record high month set earlier this year in June when 73,226 residents were on our trails. The previous high mark for June was 55,432, set in 2012.

“There’s not a typical trail user anymore. Residents of all ages, shapes and sizes – throughout our community — are embracing our trails. It’s thrilling to see not only many new users this year, but many occasional users increasing the time they spend on the trails,” said Dawn Ritchie, Director of Greenways and Trails for the City of Fort Wayne. “Good weather always increases usage – but I think the tremendous growth we’re seeing this year shows that residents are embracing our trails and more and more residents want to be part of the trail network that connects people to destinations and to each other.”

Figures for this September show an increase of more than ten thousand users with 65,744 users this year compared to a previous high of 55,037 set in September of 2012. Infrared counters are utilized to track trail users in 14 locations on City’s 70 miles of trails. The Fort Wayne Regional Trail Network adds another 20 miles outside of the City – creating a network of 96 miles in Allen County.

The City of Fort Wayne began using the infrared counters in 2010. Below are the counts for the third quarter counts covering the months of July, August, September, for the past seven years. 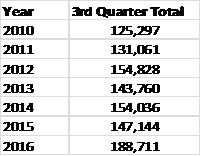 The chart below breaks down the trail count results by the previous high quarter compared to our new record.

Observations of Trail Use

The Greenways and Trails department cites the construction of new trails along with our popular free, guided community bike rides known as Trek the Trails, as two of the reasons for our increase in the number of trail users.

Sharon Slough was introduced to our trails through our Trek the Trails events.

“I thoroughly enjoyed the Tuesday night rides–and the dinners our group would have afterwards! Everyone in the Trek the Trails group was so encouraging and friendly… (I) bought a new Townie bicycle. I found bicycling to be an excellent exercise for all my muscles. The trails we went on were great. I especially like the Maumee Pathway. I can’t wait till next Trek the Trails to join the group again!” – Sharon Slough, Trail User.

For the past several years the City has added between 4-7 miles each year. That’s evident from this photo taken last month on Liberty Mills Road where users couldn’t wait to use a trail that isn’t quite complete.

About the City of Fort Wayne Greenways and Trails

The City of Fort Wayne’s Greenways began as part of the Parks and Recreation Division. From 1975 to 2005, the Parks Division built the 20-mile Rivergreenway. In 2005, as interest grew and more residents began using the trails, the current City Greenways and Trails Department moved to the Public Works Division, a fitting move as the community’s view of trails shifted from recreation to active transportation.

The move helped the City increase its trail miles from the 20 Rivergreenway miles to nearly 70 miles today. Of those 70 miles, the City designed and constructed 52 miles. An additional 18 miles were built in the City limits by the Indiana Department of Transportation (INDOT), Allen County, Aboite New Trails, housing developers, medical facilities and universities. Three of the miles within the City limits are maintained privately.

City Greenways and Trails Director, Dawn Ritchie, has managed the trail construction projects and maintenance since 2005.