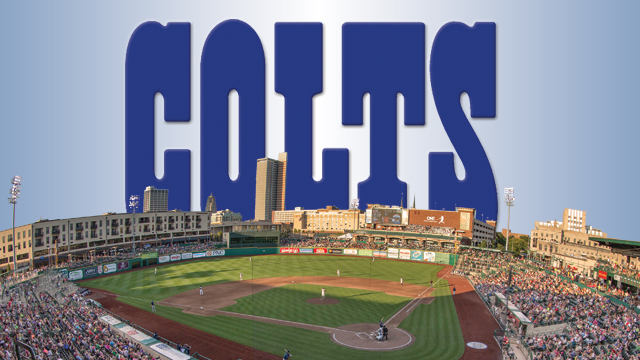 For a second consecutive season, the Indianapolis Colts will visit Parkview Field for a TinCaps game, as part of the team’s traveling marketing campaign featuring players and cheerleaders.

Colts safety Clayton Geathers, defensive tackle David Parry and cheerleaders will be signing autographs at Parkview Field on Thursday, June 2, when the TinCaps host the South Bend Cubs at 7:05 p.m.

The Colts will provide several elements for fans attending the game, including player autographs prior to the first pitch (5:30-6:45), cheerleader autographs (7:30-5th inning) and performances, Colts Mascot Blue, free Colts giveaways and Colts In Motion, the team’s traveling museum. Fans may also sign up for one of the Colts Official Fan Clubs and register to win Colts tickets.

Fans must purchase a ticket to the baseball game in order to participate in the “Colts at Bat” activities. Visit www.colts.com/events for more details.

Geathers just wrapped up his rookie season with the Colts and tallied 34 tackles. A fourth-round pick in 2015 out of Central Florida, Geathers racked up 383 tackles for the Knights, the 3rd-most in program history.

Like Geathers, Parry is heading into his second season with the Colts, looking to build on a rookie campaign in which he logged 31 tackles and a sack. A native of Marion, Iowa, Parry is a former walk-on at Stanford who developed into an All-Pac-12 defensive lineman for the Cardinal. The Colts drafted Parry in the 5th round in 2015.

Special Notes: The Colts encourage all fans to arrive early at Parkview Field. The line for player and cheerleader autographs may be cut off at any time to ensure the tour remains on schedule. Inclement weather or traffic may cause for late arrival or early departure. All Summer Tour events will take place rain or shine. Fans will be allowed one autograph person; however, fans may get back in line for additional autographs. All Colts event times are local.