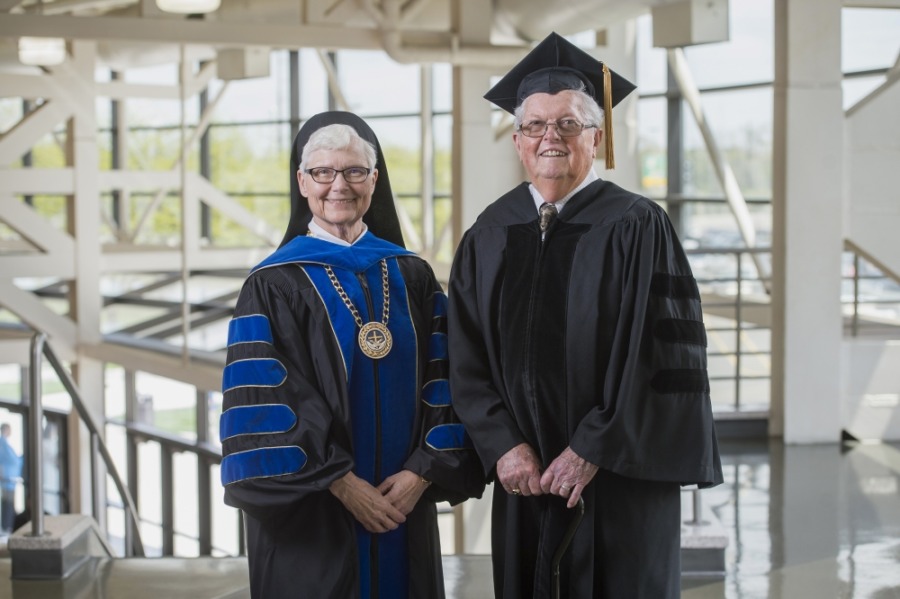 Mimi Flickinger Rolland is a devoted fan of her family, community, the arts and education. She was born in Kendallville, Indiana, and attended college at North Central College in Naperville, Illinois, where she majored in elementary education.

During her lifetime, Mimi Rolland has been actively involved in volunteer and community activities, particularly involving Fort Wayne’s inner-city. She helped establish the East Wayne Street Center in Fort Wayne and started a nursery school program that evolved into one of the first Head Start programs in the country. In addition, she has served as a Girl Scout leader for a group of nine inner-city girls, filled many roles in local public schools, and enjoys leading sing-alongs for students and senior citizens.

Involved in music groups as a college student, her love for the arts has never waned. At the University of Saint Francis, the support of Mimi and husband Ian helped to make possible the Mimi and Ian Rolland Art and Visual Communication Center, which houses the School of Creative Arts on the USF campus.

“Mimi Rolland has been such a wonderful friend of the community and of the University of Saint Francis,” said USF President Sister Elise Kriss. “Her support of our arts programs has been so important to the university and our students. She has certainly earned this honor through her years of support to USF and to the community as a whole.”

Upon graduation from Ball State in 1956, George Eickhoff began his “ministry of math,” teaching math, English and science to junior high students. In 1959, he received a master’s in mathematics education from Ball State. In 1965, George began teaching part-time at USF (then Saint Francis College). He became a full-time instructor in 1967 and remained at the college until his retirement in 1993. In addition to his regular class schedule, he taught corporate classes, conducted teacher workshops and spoke before local clubs and parent-teacher groups.

George was very active in college affairs, including chairing the Faculty Senate and Faculty Affairs Committee. He served on the Undergraduate Council, the Affirmative Action Committee, and The Young Republicans, among other groups. In 1990, he was the first recipient of the Teaching Excellence and Campus Leadership Award for Faculty.

“George Eickhoff’s dedication to education is remarkable,” said Kriss. “His commitment to spreading his ‘ministry of math’ to young people everywhere made him extremely special as a classroom instructor and as a trusted mentor to students.”