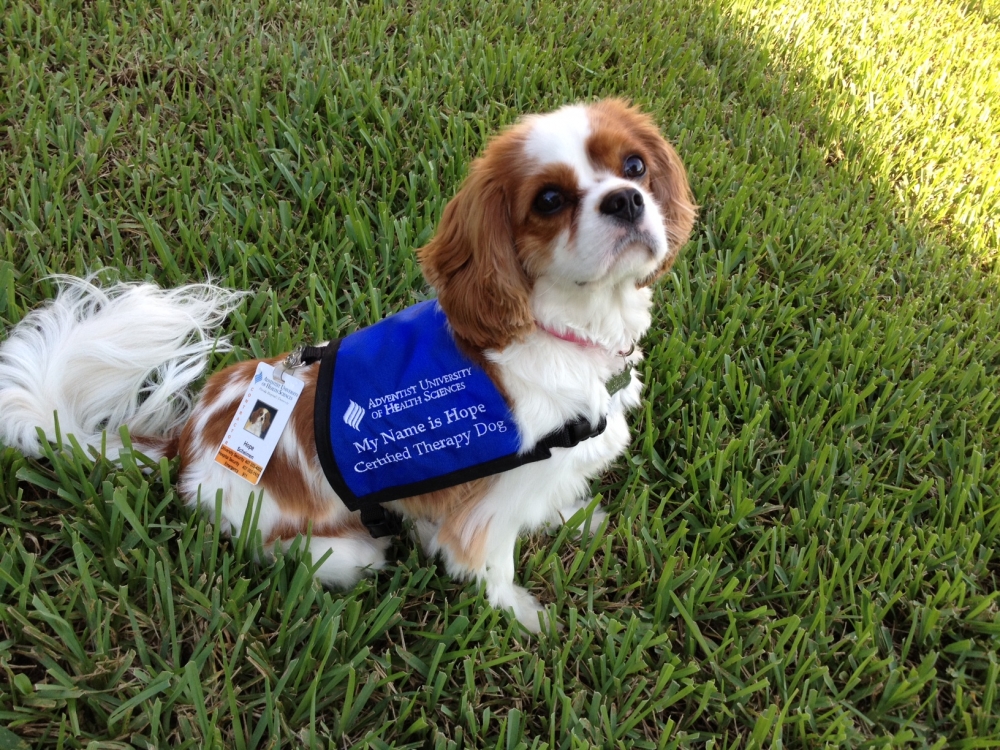 Huntington University’s campus is about to get a little more cuddly. Hope, a two-year old Cavalier King Charles Spaniel, joined the HU team as a certified therapy dog on Jan. 4.

Scheiman initially became interested in therapy dogs while guest lecturing at Adventist University of Health Sciences in Orlando, Florida, where she previously served as the program director for the occupational therapy assistant program and as associate professor. She saw students smiling and laughing with a therapy dog, which inspired her to write up a proposal to the university for her to have her own dog. The result was Hope, who started attending classes with Scheiman at 14 weeks old.

“For those students who are very shy, it helps bring them out of their shells,” Scheiman said. “It also helps me meet students I wouldn’t have had the chance to meet otherwise.”

Hope has received the American Kennel Club’s S.T.A.R. Puppy training, as well as special obedience training. After a year, she became certified with Therapy Dogs International.

“The training is very rigorous,” Scheiman said. “The harder part is keeping everyone else consistent with her rules.”

Scheiman chose to work with Hope specifically for her small size, even though most people would perceive therapy dogs to be larger.

“The reason I chose a smaller dog is because she’s a perfect size for hospital beds and nursing homes,” Scheiman said. “Also, sometimes larger dogs can be intimidating to toddlers and kids.”

As far Hope’s role on campus goes, she will assist Scheiman in lectures on animal assisted therapy in the occupational therapy department. Students will learn how to work with Hope in therapy situations. She also will spend time with students, faculty and staff.

“One thing I’ve seen is how much the students enjoy Hope,” Scheiman said. “She’s open to everyone because it’s her job to make students happy.”

Hope has a full résumé of various types of work she provides such as working with children with autism, adults with dementia and in mental health facilities. Additionally, she has been a part of three student-led research projects, which Scheiman hopes to continue at HU.

She also intends to involve Hope in the Huntington City-Township Public Library’s Paws-To-Read program, which allows children to practice their reading skills by reading aloud to a registered therapy dog.

“Hope doesn’t judge people,” Scheiman said. “She doesn’t notice if your burned or scarred, if you’re too tall or too short. She loves everybody. She brings out the best in people because she’s nonthreatening and nonjudgmental.”