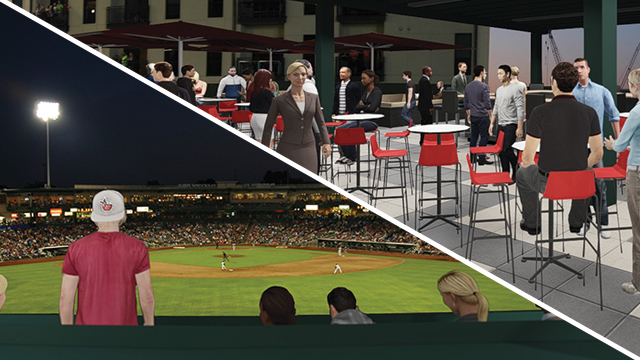 Minor League Baseball’s top-rated ballpark is about to get even better.

The Fort Wayne TinCaps announced at a press conference on Thursday that the team is set to add a group seating area atop Parkview Field’s Tuthill 400 Club. The new section will be called “The Summit” and will be presented by Tuthill.

“We’re extremely excited to be adding The Summit, presented by Tuthill to Parkview Field,” TinCaps President Mike Nutter said. “Parkview Field has been a tremendous success and we are committed to continuing to invest and improve this community icon. We are proud to do this in partnership with Tuthill, a company that shares our commitment to community and to excellence.”

“Parkview Field is a true center of Aliveness in our Community,” said Jeanice Croy, President, Tuthill Transfer Systems. “The continued growth and development of the ballpark and all it encompasses have created a true invitation for everyone in Fort Wayne. We are thrilled to have our Company associated with such a vibrant organization. Tuthill’s vision of bringing together a legion of like-hearted people with astounding impact is coming to life in our partnership with the TinCaps.”

The new area will be called “The Summit” because it will be located atop the 400 Club and in the heart of downtown Fort Wayne, nicknamed the “Summit City.” With The Summit, presented by Tuthill, Parkview Field continues its tradition as a modern facility that stays true to Fort Wayne’s historical roots.

Construction of The Summit, presented by Tuthill will begin this fall and be 100-percent privately financed by Hardball Capital, the TinCaps ownership. Not a penny will be spent from the Parkview Field Ballpark Maintenance and Improvement Fund. Current projections place the project at just over $600,000.

The TinCaps have partnered with Weigand Construction and Design Collaborative, both of Fort Wayne, for the new construction. This is the same team that designed and built the highly successful Tuthill 400 Club, which opened in 2013. The Tuthill 400 Club is the only luxury suite space in Minor League Baseball that also doubles as a batter’s eye for hitters. The Summit, presented by Tuthill will also be the only batter’s eye rooftop deck anywhere in the country.

The Summit, presented by Tuthill is expected to be ready for Opening Day 2016 — Saturday, April 9 when the TinCaps host the Lake County Captains (Cleveland Indians) at 6:05 pm.

“Parkview Field already has a big-league feel to it,” said Francisco Morales, who managed the TinCaps in 2015. “I think The Summit, presented by Tuthill is going to really make fans feel like they’re at a major league ballpark.”

“We’re always listening to the feedback we receive from fans,” Nutter said. “The Summit, presented by Tuthill allows us to offer yet another fantastic hospitality and entertainment option for our community partners, businesses, and organizations.”

Out of the 160 ballparks in Minor League Baseball, Parkview Field has been rated the No. 1 experience for fans by Stadium Journey four of the last five years, including 2014 and 2015.