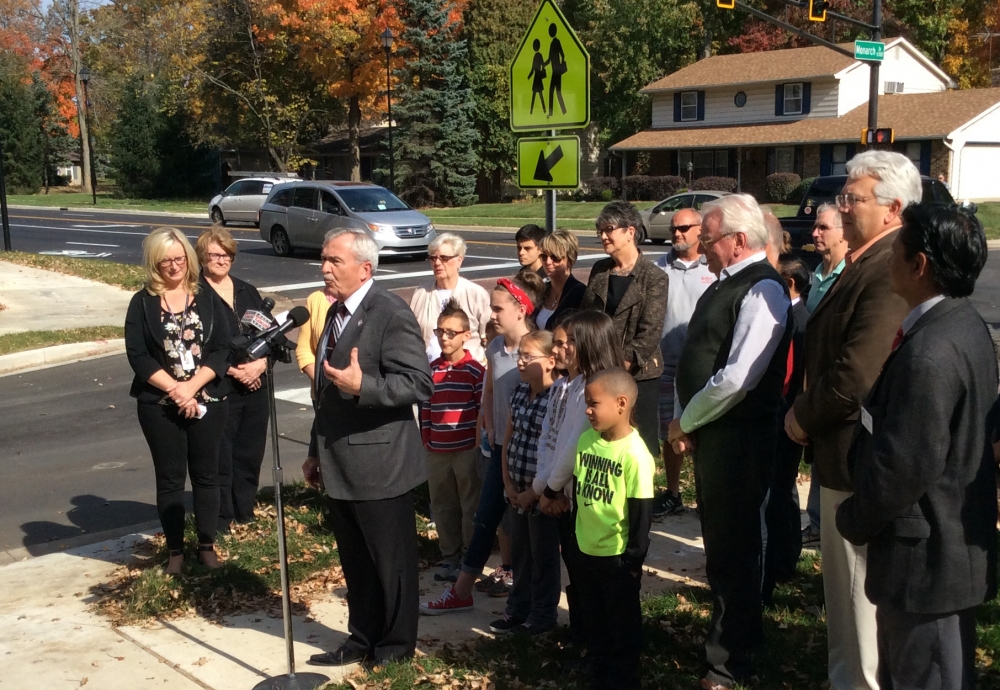 Today, Mayor Tom Henry joined residents from several neighborhoods in an area along Maplecrest Road to cut a ribbon in celebration of significant neighborhood improvements. The area includes Haley Elementary School, where many students cross Maplecrest – a street with a 17,000 daily vehicle count.

“I’m encouraged by the tremendous progress we’re making in our neighborhoods,” said Mayor Henry. “By working together, we’re moving Fort Wayne forward in the right direction by implementing effective infrastructure projects that meet the needs of our community. The record-breaking work we’re performing in neighborhoods demonstrates our commitment to improving the quality of life amenities that we offer as we continue to experience positive momentum in our City.”

Over the past two years, the City has invested nearly $45 million in neighborhood infrastructure enhancements. It’s an effort that has improved nearly 150 miles of streets, roads, and sidewalks. This year’s investment is more than $21 million.

The 14-block upgrade to Maplecrest is a significant improvement for residents and motorists alike. More than 120 elementary students live east of Maplecrest and the project offers safer connectivity for students walking to school as well as pedestrians walking to businesses in the nearby Georgetown shopping and business district.

Numerous meetings were held to get input from area residents as to what design features they would like to see integrated into the project design. Discussions included neighborhood leaders from Lofton Woods, Valley Forest, Georgetown Place and the Georgetown Square shopping center. Many of the suggestions for landscaping, barriers, crosswalks and lighting came directly from neighborhood input.

“It was rewarding to see a high level of interest and commitment from residents to assist with the improvement plans. From landscaping, to lighting to design residents had ideas that greatly enhanced this important corridor. Their ideas added value that is aesthetically pleasing and improves safety,” said Shan Gunawardena, City Engineer.

A major north/south transportation route, Maplecrest, between State Boulevard and Lake Avenue, now offers a road expansion of two driving lanes in each direction to accommodate the 17,000 vehicles using it each day. Traffic lanes are now separated by a median or center turn lane where needed, and the roadway improvements include a trail that connects to the Rivergreenway, a wider sidewalk with a park strip buffer, a new traffic signal and brick crosswalk at Maplecrest and Monarch Drive near Haley Elementary, new water mains to improve reliability and stormwater pipes to enhance drainage.

Landscaping is underway and will include over 200 street trees and a gateway marker for the Georgetown area.

Eighty percent of the $5.7 million road and streetscape improvements is federally funded, with the remaining 20% coming from the City’s Public Works budget.

The improvements between Lake and State complement the Maplecrest extended project that was completed a few years ago by the Allen County Highway Department. That project extended the road and trail from Lake to Indiana 930.

Design work is already underway for the next phase of upgrades along Maplecrest. The additional traffic lanes and streetscape between State and Stellhorn Road will be completed by 2018. Those improvements will have similar streetscape features that improve transportation safety, add trails, and improve drainage for the area. Once completed, Maplecrest will be four lanes all the way through the City.