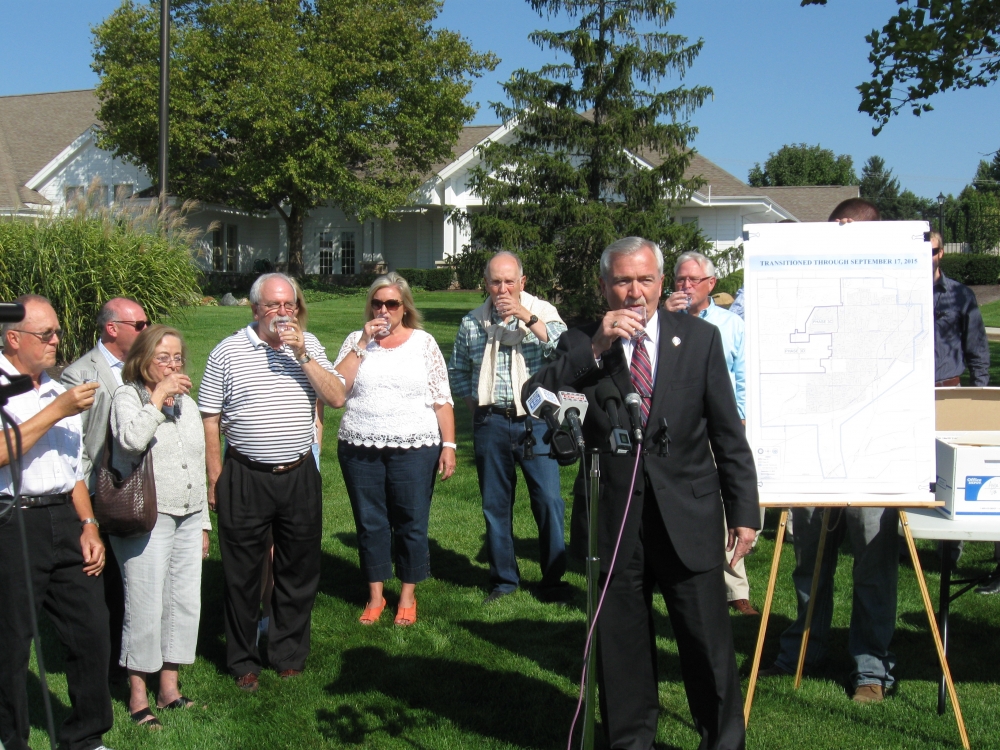 This week, nine months after becoming City Utilities’ customers, residents of southwest Fort Wayne hit a milestone of saving more than $1 million collectively on their water bills. And today, Mayor Tom Henry joined residents of Sycamore Hills to celebrate the savings and the delivery of City water to their neighborhood. Sycamore Hills was the first southwestern neighborhood to start a petition to have the City supply water instead of Aqua Indiana.

In addition to several that submitted petitions, over 40 different neighborhoods contacted the City, voicing displeasure with Aqua’s rates and service levels, and expressing a desire to switch to City Utilities.

Mayor Henry’s commitment to enhancing water services for southwest Fort Wayne began in 2008 shortly after he took office and successfully completed the transition of northern Aqua Indiana customers to City Utilities. Mayor Henry also met with the neighborhood’s leaders about their concerns during the 2012 drought and moved forward with a request to the Indiana Utility Regulatory Commission (IURC) to encourage the State of Indiana to take a closer look at residents’ concerns about water quality and pressure.

As he has with each phase of the water transition in the southwest part of the City, Mayor Henry today joined residents with a water toast to good tasting, clean water from City Utilities.

With today’s transition, all of the neighborhoods within Fort Wayne city limits are now receiving City Utilities water.

“By working together, we’ve made a tremendous improvement to water services in southwest Fort Wayne,” said Mayor Henry. “Providing high quality and affordable water is another example of why we’re experiencing positive momentum and excitement in our community. We’re a leader in meeting the needs of residents, neighborhoods, and businesses as we invest in the future and move Fort Wayne forward in the right direction.”

All of the 12,500 customers of the former Aqua service area began receiving City Utilities lower pricing on December 3, 2014, even as the various transition phases continued. The savings for the average City household previously served by Aqua Indiana is more than $120 per year.

“Mayor Henry’s leadership has been impressive throughout this difficult and lengthy acquisition process. He was committed, not only to bring good tasting water to all Fort Wayne residents, but better pressure to assist firefighting operations. That’s a promise he made to residents and it’s a promise he kept,” said Kumar Menon, Director of City Utilities.

More than 70 percent of the former Aqua Southwest customers are City residents. Since taking ownership of the southwestern service area more than 9,000 customers have been transferred over by City Utilities. The remaining neighborhoods, all the way to the Whitley County line, will be transferred next month.