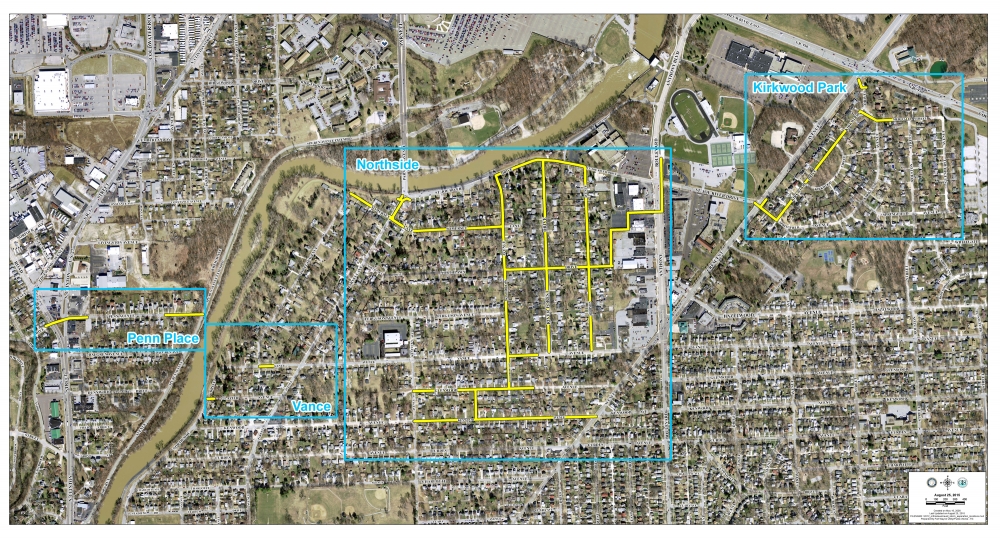 Mayor Tom Henry joined residents, river supporters and City Utilities’ staff to celebrate a significant milestone of reducing combined sewer overflows (CSO) to no more than one per year on the St. Joseph River. The achievement complies with federal mandates and shows the number of combined sewer overflow events on the river is down to only one in a typical year – an accomplishment that is four years ahead of schedule!

Since entering into an agreement with federal and state regulators for compliance with clean water mandates in 2008, City Utilities has met every deadline. Today’s celebration recognizes a win for neighborhoods near the St. Joseph and for all residents of Fort Wayne as we focus on renewed interest in the value of our rivers and how they can improve quality of life and lead to economic growth.

“This is a tremendous accomplishment to achieve as we continue to work together to make a meaningful difference for residents, neighborhoods, and businesses. Our commitment to being good stewards of the environment and our rivers sends a strong message that we value being a leader in providing excellent services and enhancing the quality of life we enjoy in Fort Wayne,” said Mayor Henry.

Over the past eight years, City Utilities has invested more than $12 million in neighborhood projects along the St. Joseph River. These efforts have protected nearly 500 homes from basement backups and street flooding and reduced the number of overflows on the river in a typical year from 13 to one. These efforts have kept 16 million gallons of overflow out of the river and the investments have created and supported nearly 300 jobs.

“Cleaner rivers are not only a mandate they are the right thing to do. The community values our rivers and that’s evident by the renewed interest to re-connect and look for new opportunities to incorporate our rivers in our daily lives. We are seeing that unfold with plans to develop along the rivers downtown. Our staff is committed to being good stewards of our resources by protecting them and understands that they are vital to our future,” said Kumar Menon, Director of City Utilities.

The Federal Consent Decree required Fort Wayne to achieve the one overflow per typical year status on the St. Joseph River by 2019. Through careful, “big picture” planning and coordination, City Utilities was able to accomplish this earlier allowing planned sewer projects in the Lakeside area and Morton Street to address overflows on the Maumee River and sewer separation in the Bloomingdale neighborhood that impact the St. Marys River, to begin several years ahead of schedule.

The milestone reached on the St. Joe is significant, but there is still work to be done on the Maumee and the St. Marys rivers. In addition to neighborhood projects to separate sewers and reduce the risk of sewer backups, a deep rock tunnel will be the largest public works investment in the City’s history. Engineering design of the five-mile long tunnel is already underway with construction expected between 2017 and 2023. The tunnel is the culmination of CSO reduction efforts on the St. Marys and Maumee rivers, and along with the investment of more than $50 million already made at the wastewater treatment plant, will reduce CSO events on those rivers to just four in a typical year.

While we have invested in our resources there is still work to be done by all of us. Residents can help by picking up waste from their pet and making sure to not overspray with fertilizer or weed products. It’s important to prevent runoff into our waterways which have a direct connection to our storm drains. For our part we will continue to work closely with farmers and other interested parties upstream who are part of the St. Joe Watershed Initiative.

Fort Wayne’s original sewers carried stormwater runoff from streets to the rivers. When people began to use indoor plumbing, these facilities connected to the existing storm sewers and much of the community’s sewage discharged to the rivers. In 1940, a sewage treatment plant was built to collect and treat most of the City’s sewage, but as more homes were built and added indoor plumbing after World War II, the City grew and so did the amount of flow going into Fort Wayne’s sewers.

As Fort Wayne’s combined sewer system developed it was state-of-the-art. The original storm sewers became combined sewers carrying both sanitary sewage and stormwater runoff and many sewers continue to function that way. When it’s not raining all of the sanitary sewage goes to the sewage treatment plant. When it rains or snow melts, combined sewers may not have enough capacity to carry all the flow. At these times some of the wastewater is discharged to the nearest body of water creating a combined sewer overflow (CSO). Federal standards allowed sewers to overflow into the river when they were overloaded.

As our country became more environmentally conscious, laws and regulations changed and the combined sewer system was no longer an accepted practice. In 1970, President Richard Nixon established the Environmental Protection Agency and under his presidency the regulations of the Clean Water Act became law in 1972.

The City is under court order – called a Consent Decree — to greatly reduce the number of combined sewer overflows going to our rivers, reduce sewage that backs up into homes during wet weather events, eliminate sanitary sewer overflows, and operate and maintain the sewer system’s reliability through continued repair and rehabilitation. Negotiations with the United States Department of Justice, Environmental Protection Agency and Indiana Department of Environmental Management went on for more than 10 years before an agreement was reached in late 2007.

The Consent Decree requires City Utilities to reduce the number of overflow events from the current average of 71 times a year on our rivers to five overflows. The plan orders Fort Wayne to reduce those overflows to no more than four times in a typical year on the St. Marys and Maumee rivers and only one time in a typical year on the St. Joseph. The aggressive schedule requires a massive investment in system improvements over an 18-year period through the year 2025.

· St. Joe Relief Sewer: The relief sewer picks up floodwater, rain and snow melt from three combined sewer overflow outfalls, bringing them into compliance with the one overflow event per year requirement. An improvement to capture floating objects, such as trash and other debris, and keep them out of the river was added to one of the outfalls. (investment -$4,746,700)

· St. Joe Relief Sewer Connections: This project included smaller relief sewers as well as minor piping and changes to three outfalls bringing them into compliance with the one overflow event per year requirement. (investment – $648,000)

· St. Joe Diversion Structure: This project involved construction of a relief sewer to connect directly with the new wet weather pump station at the sewage treatment plant. This increased the capacity in the St. Joe Interceptor to allow for the additional flow from the St. Joe Relief Sewers. The relief sewer, connections and diversion structure reduced CSO volume by 11 million gallons. (investment – $2,000,000)

· Additional Floatables Control to keep trash, food wrappers and other debris from the rivers. This improvement has kept 10,000 pounds of floating debris from the St. Joseph River. (investment -$1,435,000)

In 1995, City Utilities established the Sewer Task Force. The group was assembled with residents from neighborhoods across the City to study, provide input and assist City Utilities in moving forward with efforts to comply with the Clean Water Act. This group of dedicated citizens has been very helpful and instrumental in implementing compliance efforts required by the Consent Decree.

After the Sewer Task Force provided a set of recommendations to City Utilities in 1997, the group continued to be active and last year broadened its focus becoming the Utility Advisory Group, to facilitate community input on topics in the water, stormwater and sewer utilities.

Realizing that the unfunded federal mandate was going to require the community to pay for the necessary sewer system improvements, Mayor Henry formed the Clean Rivers Task Force in 2008. The group included leaders from neighborhoods, businesses, education, health care and City and County elected officials.

Task Force members looked at a number of funding options to meet the unfunded federal requirements and concluded that the sewer utility needed to look to rates, not taxes, for the revenue needed to make the improvements.

The Initiative, a non-profit partnership, exists to protect, restore and enjoy the St. Joseph River and its watershed, which stretches across 694,400 acres through six counties in Indiana, Ohio and Michigan. City Utilities supports this group and serves on the Board of Directors.