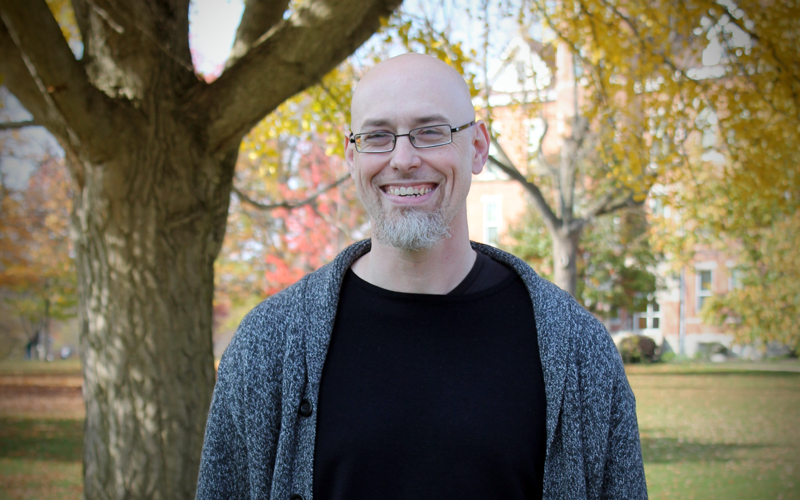 Huntington University is pleased to announce that Travis Derico, adjunct professor of Bible and religion, is one of a select group of faculty members nationwide chosen by the Council of Independent Colleges (CIC) and the Center for Hellenic Studies to participate in an Ancient Greece in the Modern Classroom seminar on “Song Culture of Athenian Drama.”

“As someone with a deep interest in the written and oral traditions of the first Christians, I’m always keen to learn more about the Greek dramatic traditions that so influenced the New Testament writers, and especially about aspects of those traditions that aren’t easily captured in written texts—things like musicality, tone, and gesture,” Derico said. “So I’m very excited to be able to represent HU at this year’s CIC/CHS seminar.”

CIC and the Center for Hellenic Studies recently selected 19 faculty members to participate in “Song Culture of Athenian Drama,” which will take place July 20–26, 2015, at the Center for Hellenic Studies campus in Washington, DC. Gregory Nagy, Francis Jones, professor of classical Greek literature and professor of comparative literature at Harvard University, and Kenneth Scott Morrell, associate professor of Greek and Roman studies at Rhodes College, will lead the seminar. The seminar is generously funded by the Andrew W. Mellon Foundation.

“Strengthening the teaching of the classics at colleges and universities is of critical importance. This seminar series addresses the challenge of keeping alive in undergraduate education classical texts that a generation ago were read and understood by every college graduate,” said CIC President Richard Ekman. “We believe that Travis Derico will play a strong role in the seminar.”

Designed for non-specialists, the seminar will focus on the work of Euripides, a playwright from the fifth century BCE. Participants will explore the performative aspects of his plays and the ways he drew upon, adapted, and transformed a range of lyric traditions. Participants also will compare the choral song making of Euripides to the approaches of other contemporary composers of tragedy (and comedy) and situate it within the parallel forms of song making that survive from sixth century Lesbos and elsewhere.

For 10 years, CIC has collaborated with the Center for Hellenic Studies to provide seminars on teaching the classics for small and mid-sized independent colleges that have a limited number of faculty members or courses in the classics. The seminar is ideal for faculty members who have been trained in other disciplines and who seek opportunities to explore major classical texts and learn new ways to teach these texts to undergraduates.

For more information, visit the CIC website at www.cic.edu/AncientGreece

The Council of Independent Colleges is an association of 750 nonprofit independent colleges and universities and higher education affiliates and organizations that has worked since 1956 to support college and university leadership, advance institutional excellence, and enhance public understanding of private higher education’s contributions to society. CIC is the major national organization that focuses on providing services to leaders of independent colleges and universities as well as conferences, seminars, and other programs that help institutions improve educational quality, administrative and financial performance, and institutional visibility. CIC conducts the largest annual conference of college and university presidents. CIC also provides support to state fundraising associations that organize programs and generate contributions for private colleges and universities. The Council is headquartered at One Dupont Circle in Washington, DC.

Harvard University’s Center for Hellenic Studies, located in Washington, DC, was founded by means of an endowment made “exclusively for the establishment of an educational center in the field of Hellenic Studies designed to rediscover the humanism of the Hellenic Greeks.” This humanistic vision remains the driving force of the Center for Hellenic Studies. The Center brings together a variety of research and teaching interests centering on Hellenic civilization in the widest sense of the term “Hellenic.” This concept encompasses the evolution of the Greek language and its culture as a central point of contact for all the different civilizations of the ancient Mediterranean world. Interaction with foreign cultures, including the diffusion of Roman influence, is an integral part of this concept.