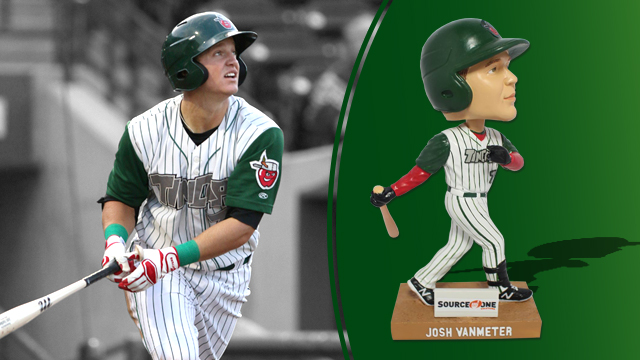 The first 2,000 fans at Parkview Field on Sunday, Aug. 16 will receive a free Josh VanMeter bobblehead. The TinCaps host the Cedar Rapids Kernels (Minnesota Twins) that day at 1:05 p.m.

“It’s terrific to be able to feature Josh on a bobblehead,” TinCaps President Mike Nutter said. “He’s a great prospect for the Padres, but he’s an even better young man. We thank the folks at Source One Solutions for making this bobblehead possible.”

VanMeter, who’s from Ossian, Ind. (15 miles from Downtown Fort Wayne), was selected by the San Diego Padres in the 5th round of Major League Baseball’s 40-round draft in June 2013. Last year, as a 19-year-old, he played his first full professional season as a TinCap.

The left-handed batting middle infielder hit .254 in 116 games with 3 home runs and 39 runs batted in a year ago. He had the second highest batting average on the team in the second half of the season, hitting .281.

VanMeter drove in all four of Fort Wayne’s runs on the final day of the regular season in a 4-0 win against the Bowling Green Hot Rods to send the TinCaps to the Midwest League Playoffs for a sixth consecutive year. In the team’s postseason opener, he had the game-winning hit in the eighth inning against Detroit Tigers pitcher Luke Putkonen, who was making a rehab appearance with the West Michigan Whitecaps.

VanMeter’s clutch performances with the TinCaps in 2014 came after he led nearby Norwell High School to a Class 3A State Championship in 2013.

“It’s an honor for us to sponsor a giveaway item to the fans at Parkview Field that celebrates the beginning of a very promising baseball career,” said Jim Beights, Source One Solutions Marketing Director. “Josh is one of us — a member of our own community — and having his own bobblehead will help us all remember his time with us in Fort Wayne as a member of the TinCaps. We wish him the very best in his endeavors.”

VanMeter was on Fort Wayne’s active roster to begin the 2015 season. After reaching base three times through his first six at-bats, in the second game of the year on April 13, he fractured his left fibula while in the field turning a double play at second base.

At 20-years-old, VanMeter is regarded as one of the Top 30 prospects in San Diego’s farm system.

Although disappointed to be on the TinCaps’ disabled list for the time being, VanMeter is thankful for having a bobblehead made in his likeness.

“It’s pretty cool,” said VanMeter, who’s currently rehabbing at the Padres’ facilities in Peoria, Ariz. “The bobblehead looks really good. I appreciate the TinCaps and Source One Solutions for doing it.”

Last year the TinCaps gave away Matt Wisler bobbleheads. The Bryan, Ohio, native pitched in Fort Wayne in 2012 and is currently in the Atlanta Braves organization with the Triple-A Gwinnett Braves. Wisler is a likely candidate to make the big leagues this season.

“It’s our honor to give away 2,000 bobbleheads of another area player,” Nutter said. “From Josh’s amateur days with the Summit City Sluggers and the Norwell High School State Championship, he has always been a fierce competitor and great performer. That is the case now that he’s a TinCaps player and hopefully someday he will be a major leaguer with the San Diego Padres.”