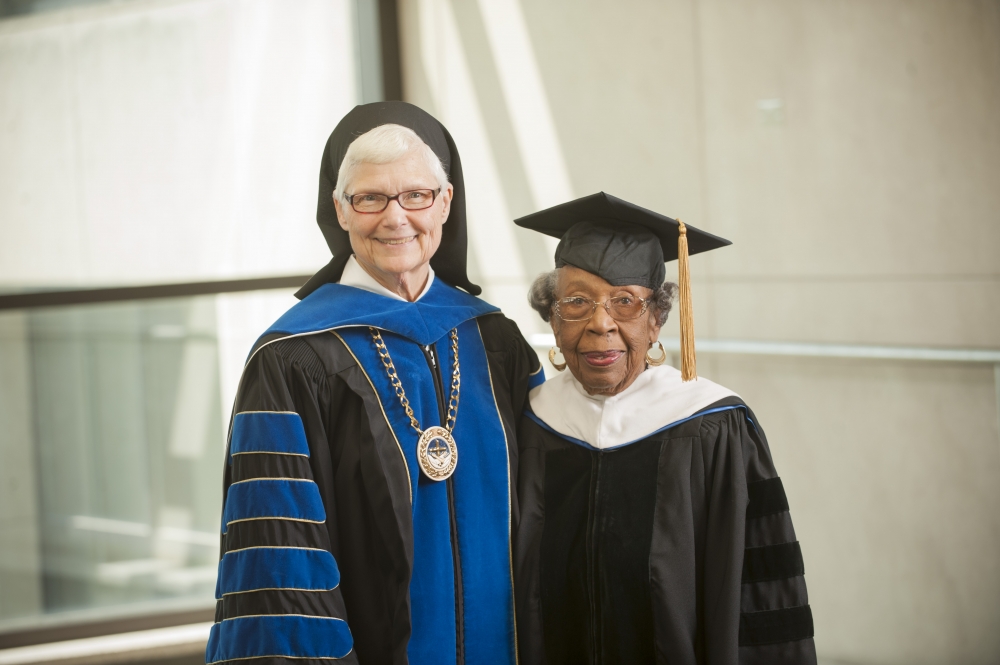 Scheetz, born Mary Helen Scheetz, was raised in Lafayette, Indiana, where she graduated from Saint Francis High School. She later attended USF, then called Saint Francis College, which had just moved from Lafayette to Fort Wayne, where she earned her undergraduate degree. Scheetz completed her graduate studies at the University of Notre Dame and the University of Michigan before pursuing a career in education.

After eighteen years of elementary and secondary education in Catholic Schools, Scheetz returned to the university, where she taught English and served as Academic Dean, before becoming president, a position she held for 23 years. Sister JoEllen then retired to the Saint Francis Covenant in Mishawaka, where she completed Volume II of the History of the Sisters of Saint Francis of Perpetual Adoration, the Eastern Province. Sister JoEllen Scheetz passed away in 2014, but her influence on the university has never diminished.

“Sister JoEllen was a friend and a trusted mentor to me,” said current president Sister M. Elise Kriss. “So much of what we do today at the University of Saint Francis is only possible because of the work Sister JoEllen did before us. She is most certainly deserving of this honor.”
In 1960, Hana Stith was among the first African-American teachers to be hired by Fort Wayne Community Schools. She taught at McCulloch Elementary School for seventeen years until its closing. There she gained respect and recognition for her teaching skills and compassion for children. During her 36-year teaching career, mostly in inner city schools, she spent 22 years in the classroom and 14 years as a Title I Math and Reading Teacher. To this day, she maintains relationships with her first students, their children and grandchildren.

Retired from Fort Wayne Community Schools in 1996, she has served as a docent at the Lincoln Museum, on the Executive Board of the NAACP, Fort Wayne Urban League and was a co-founder of the African/African-American Historical Society. After researching and collecting materials for years, she founded and opened the African/African-American Historical Society Museum on February 1, 2000. There she was the CEO, Manager and Director until February 18, 2013.

“Hana Stith is an inspiration to us all, and the work she continues to do for our young people shows how dedicated she is to education,” said University of Saint Francis president Sister M. Elise Kriss OSF. “Her years of dedication to our community and to education as a whole makes this honor well-deserved.”