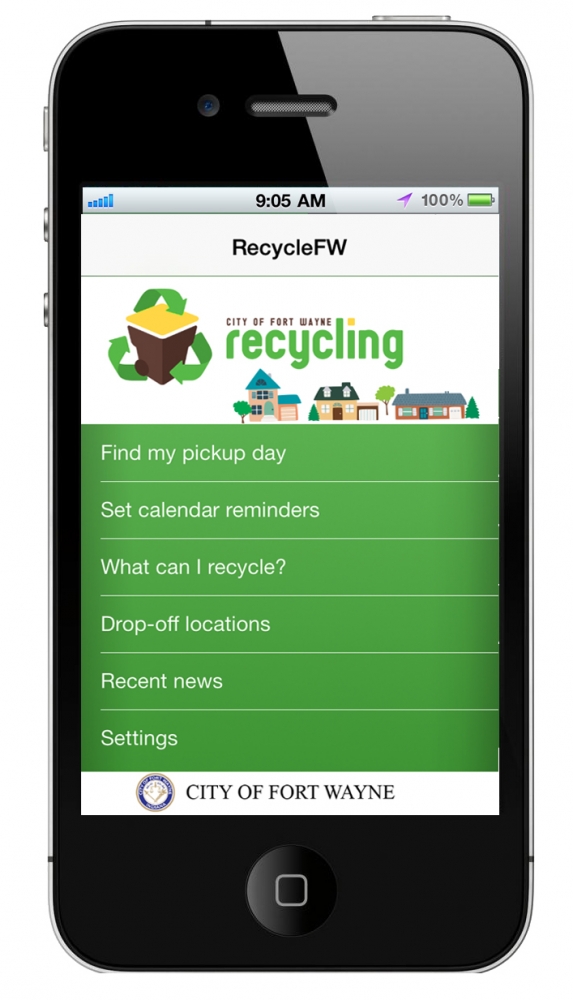 This week, to help residents get easy access to information when they need it, the City of Fort Wayne is launching the free app called RecycleFW.

“As participation has grown, so has the number of questions coming in from citizens about recycling. To better serve the public, we’ve increased communication using bill stuffers, mailers, a dedicated webpage and videos,” said Fort Wayne Mayor Tom Henry. “Our new App will give citizens access to information from their iPhone, iPad or Android, any time they want, whether on the road or at home.”

RecycleFW can be downloaded from the Apple Store for IPhone and IPad users and at Google Play for Android users.

The app will help residents set a reminder notice about their recycling day, gather instant information about what can be recycled and where to take items that can’t be placed in the cart.

The app also has a link to current information about holiday schedules, leaf collection and advice on how to handle everything from spring and summer yard waste to holiday wrapping paper.

“We know that residents are going to find this useful and that it will be able to quickly answer many of their questions. The app is an enhancement to our communications efforts and I can assure residents who may not have access to a smartphone or tablet that we will continue to reach out on the City’s webpage, through newsletters, and traditional printed material as well,” said Bob Kennedy, Director of Public Works.

Fort Wayne’s One Cart system accepts plastics #1-#7, glass, metal, aluminum, paper products, and cardboard. One feature of the app will allow residents to navigate to the Allen County Solid Waste District to view information about items such as tires, electronics and light bulbs that can be recycled at various locations throughout the City, but not in a cart.

In addition to the app, residents can still get online information from their phones via the internet at recyclefortwayne.org.

The app was created by the Asher Agency and programmer Ben Williams.

o 2010 was last year of the bin system. This tonnage includes the weight for heavy paper/cardboard that could have been wet when collected

o New one cart system has a lid to prevent paper/cardboard from getting wet.

· Green Community Award – Indiana Association of Cities and Towns (IACT). Recycling efforts were a major part of this award that also recognized the City’s fleet, and commitment to green initiatives. – 2011