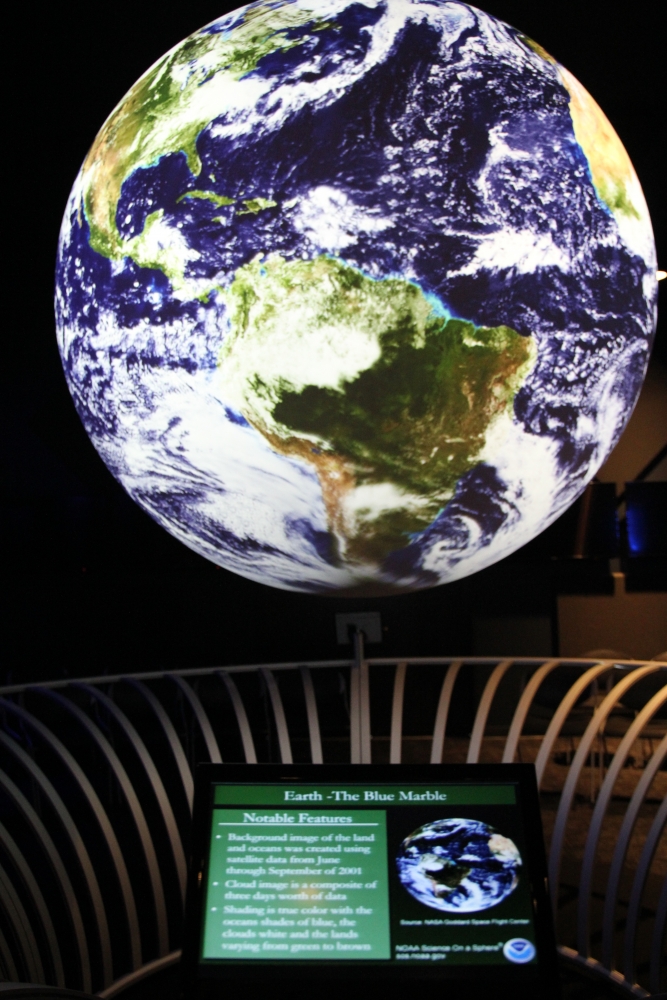 WHO:
Science Central, the region’s premier gateway for science education, will open its new $1.5 million exhibit, Science On a Sphere, on Saturday, October 5.

NASA Science On a Sphere Program Coordinator Maurice Henderson, from the NASA Goddard Center in Greenbelt, Maryland, will be in Fort Wayne for the opening and will be available for interviews.

WHAT:
Science On a Sphere is a dynamic, animated global display system developed by the National Oceanic and Atmospheric Administration (NOAA). It uses computers and video projectors to show planetary data on a six-foot diameter sphere. It was developed by NOAA researchers initially as a research tool, and ultimately as an educational tool to illustrate science to people of all ages. To the naked eye, the Sphere actually appears to be floating and rotating in mid-air, just like a real planet. It will be a “must see” exhibit at Science Central, illustrating earth, space and social sciences. It will also provide real-time imagery, such as satellite, buoy and sensing station links to global weather, earthquakes, tsunamis, and other activities occurring on Earth, as well as NASA images of the planets and moons of our solar system. Visit http://sos.noaa.gov <http://sos.noaa.gov&gt; for more information.

Science On a Sphere was invented by Dr. Alexander "Sandy" MacDonald, the director of the NOAA Earth System Research Laboratory in Boulder, Colorado, and Chief Science Advisor for NOAA’s Office of Oceanic and Atmospheric Research. Dr. MacDonald came up with the concept for Science On a Sphere in 1995 as an outgrowth of other visualization projects he was directing within the former Forecast Systems Laboratory.

“The opening of the exhibit, the 101st installation in the world, puts Fort Wayne’s Science Central on a list that includes Paris, Singapore, Mexico City, Beijing and Washington, D.C. as being home to a “Sphere” exhibit,” said Martin S. Fisher, executive director of Science Central. “The opening is the culmination of a five-year, $1.5 million capital campaign.”

The new exhibit is the first major construction completed at the popular science center since its opening in 1995, and was constructed in the building’s west side, tapping into 35,000 square feet of former warehouse space.

WHERE:
The Sphere is located in the new AEP Foundation Science On a Sphere Theater, located in Science Central’s west side, on the top level of the building.

WHY:
“Having Science On a Sphere brings Science Central’s educational capabilities to a whole new level,” said Fisher. “We’ve been working on this project for over five years, and we’re excited and eager to share it with the community. This will give our visitors the chance to experience real time data from satellites, to look at the world as astronauts do, to take an up close look at a variety of planets, and to learn about a wide variety of science-related subjects. We thank all of our sponsors, with special thanks to the AEP Foundation, for allowing us to bring this amazing educational resource to Fort Wayne.”