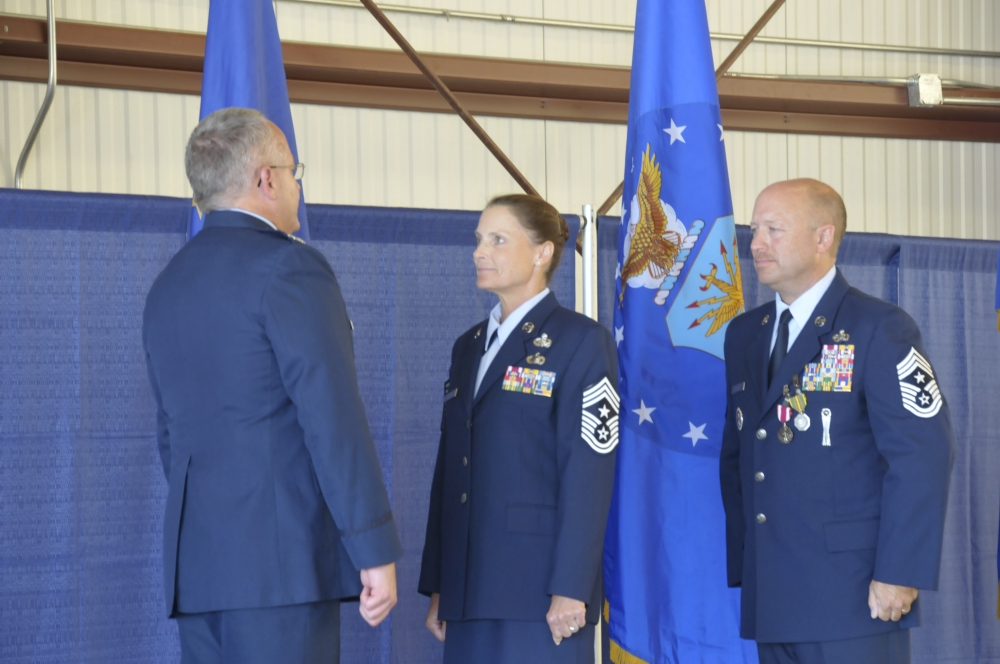 Salway has been selected to serve as the State Command Chief for the Indiana Air National Guard at Joint Force Headquarters in Indianapolis. Commander of the 122nd Fighter Wing, David L. Augustine said of both Chiefs, ³Men and women of the 122nd Fighter Wing, this is a momentous occasion for all of us, I could not be prouder of these two blacksnakes that we honor today, they represent the very best of the Air Force, the Air National Guard and the 122nd Fighter Wing.² He said to Chief Master Sgt. Hutchins, ³You are the right leader for the right time, at the right place, to follow in the footsteps of Command Chief Salway. I say ~follow~ lightly because I know that you will make your own tracks just as Chief Salway did in taking this wing to new heights. This is a very important day in the history of the wing, a historic event, we salute promoting our first ever female airman into the position of Wing Command Chief!²

Hutchins began her career in 1982 enlisting here as an Administrative Communications Clerk in the Combat Support Squadron. She has served in various positions including Personnel Administrative Assistant, Commanders Assistant, Base Records Manager, Information Management, C4 Plans, and Cyber Systems Manager. She holds a Master¹s Degree in Organizational Leadership from Indiana Institute of Technology and has been awarded with many superior performer recognitions and is highly decorated as an Information Management Craftsman.

Duties of the Wings Command Chief include understanding the challenges ahead of our airmen as we continue to fill an operational role overseas while protecting the homeland here in Indiana. Hutchins understands the challenges of conversion, grade leveling and airman development. ³She will be an ambassador on not only the local or state scene but also the national scene for airman programs, her keen eye towards morale will allow us to enhance family programs and airmen programs alike.² said, Augustine.

Hutchins taking the opportunity to address the formation gathered for the ceremony said, ³I¹m both honored and excited about being selected to serve as the next 122nd Fighter Wing Command Chief -I am eager to have the chance to be your enlisted voice.² She shared her understanding that change is a constant factor in the Air National Guard illustrated by sharing that she has personally changed AFSC¹s and taken part in aircraft conversions three times in her career. ³We have some challenges in front of us but I am confident that we will overcome them in an outstanding fashion as we have in the past!²