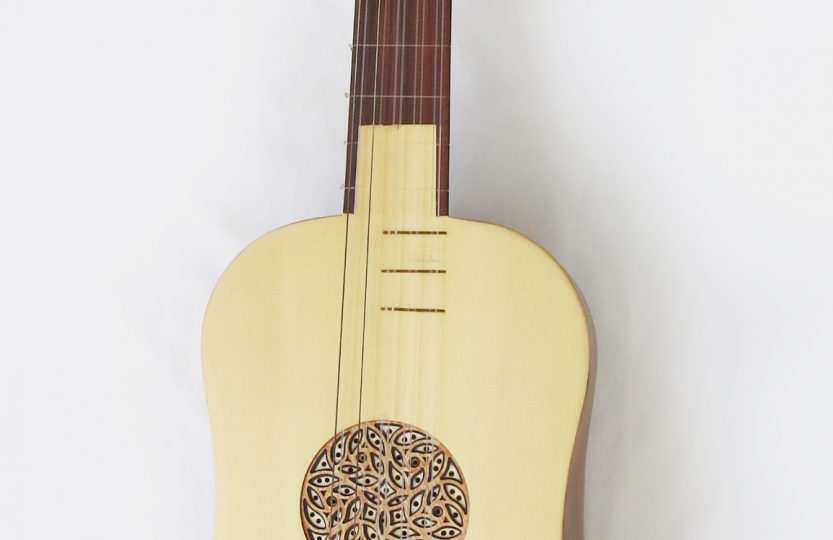 Fort Wayne Museum of Art is proud to present “Medieval To Metal: The Art & Evolution Of The Guitar”, a touring exhibition on view at FWMoA September 29-January 6 that celebrates the artistic development of the guitar.

Developed by The National GUITAR Museum (NGM), it features 40 objects, ranging from the intricately inlaid Moorish oud and 6-foot long Renaissance theorbo, to the modern Italian design of the Eko and transparent acrylic body of California’s BC Rich guitars. Spanning centuries of design and craftsmanship, the exhibition takes visitors through the history of an object that is one of the most recognizable items on the planet.

“Over the past several years, interest in the guitar as an icon has grown significantly,” according to HP Newquist, executive director of the NGM. “The guitar has been a signature element of world culture for more than 500 years; now visitors can explore the design history and artistry that has played a major role in the guitar’s evolution.”

The guitar pervades culture beyond music. It was an integral element of the work of both Vermeer and Picasso, and today it is incorporated into advertising everything from clothes and cars to the Olympics. “It’s hard to find anyone who hasn’t been affected by the guitar, whether as players or just fans of all types of music. And while this may be apocryphal,” Newquist adds, “it’s a widely held belief that the two most recognizable man-made shapes on the planet are those of the Coca-Cola bottle and the electric guitar.”

“I’m particularly excited about this coming to our museum because of the thriving music scene that’s grown considerably just in the past few years. I see endless crossover between visual art and the artistry of this instrument. I’m betting that music lovers of all kinds will appreciate learning about both the origins of this instrument and celebrating its evolution to the rock guitars of today,” said Charles Shepard, president & CEO of FWMoA.